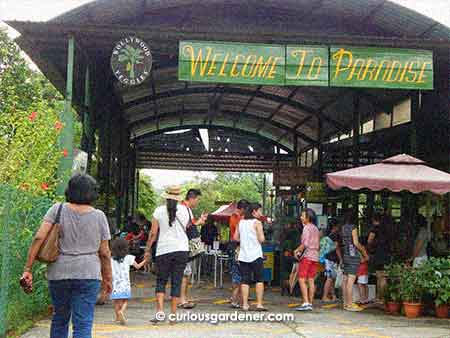 “Welcome to Paradise,” was the very first thing farm owner Ivy Singh-Lim said to us. I guess Bollywood Veggies is paradise to anyone who loves growing plants. I liked it, as apparently did the droves of people who visited the farm.

What better way to start Singapore’s extra-long Jubilee Weekend than with a field trip to Kranji, the country’s farming district? Well, it is, in my book! Going to the Kranji countryside is like going back in time and visiting Singapore in an earlier era. The roads are mostly narrow and winding, bordered by lots of lush green growth. There’s also a good variety of wildlife as it is next to the Sungei Buloh Wetlands park. Drive carefully because you don’t know what may be on the roads. We spotted what was likely a pangolin that had been run over at the edge of the road. 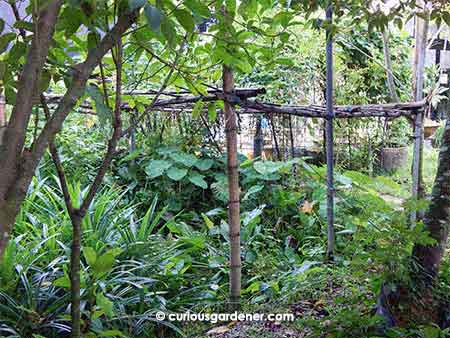 All this lush growth lines the way in to the bistro at the entryway to the farm, accompanied by the song of frogs hidden somewhere within.

Armed with cameras, wet weather gear and good company, we started out at Bollywood Veggies in the not too early morning. The first matter to attend to was to have brunch at Poison Ivy Bistro. The food was delicious and well presented; and it was well received, too! However, my eyes were continually drawn to the outdoors where I could see ponds and lots of land contouring. My thoughts on this were confirmed when Ivy Singh-Lim, one of the owners of the farm, came around to chat, and mentioned how they harvest and conserve water there. I couldn’t wait to go out and see this in practice as I’ve only read about it or seen videos on it. 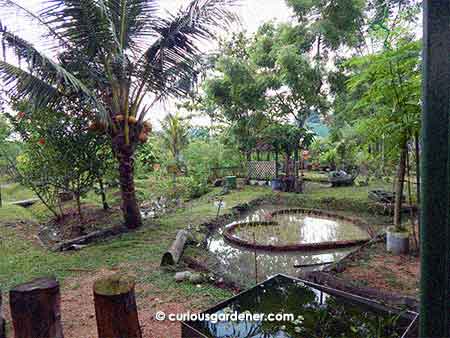 The first of the ponds, next to the bistro. It didn’t feel like we were on mainland Singapore any more…

The weather wasn’t too cooperative, though, as it began to rain while we were still eating. When there was a clap of thunder, a siren went off to warn people out in the farm to get indoors quickly. Singapore has the highest instances of lightning strikes in the world, after all. Why? I haven’t discovered yet. Fortunately, the rain had begun to peter out by the time we had finished eating, and we went exploring in a light drizzle. 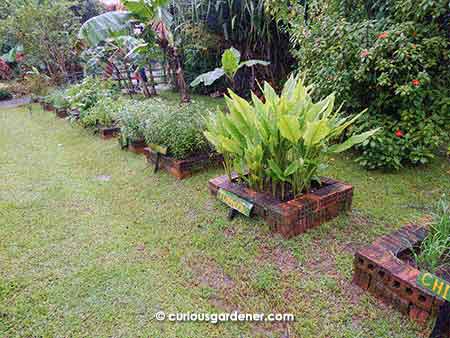 Near the entrance of the farm, plants are more on display – laid out neatly and named properly for visitors to see.

One thing to bear in mind when you’re going to traipse around these outdoor places is to have proper footwear. We city-dwellers are used to properly paved paths wherever we go, but out on the farm, tracks are more common – and on a rainy day as we experienced, they were a bit muddy with lots of puddles everywhere. I don’t have anything against that because plants need the water, and at Bollywood Veggies, they certainly know how to harvest rainwater! 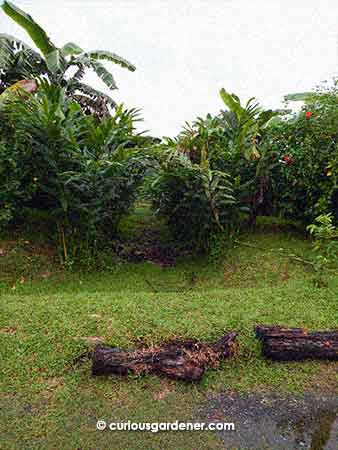 Notice how they have made the swales around the rows of plants? Bollywood Veggies has a wide variety of banana plants, so you will see rows and rows of them everywhere.

There were swales aplenty that, thanks to the wet weather, were demonstrating just how they worked. Many were flooded in varying degrees and were channeling the water in them around the farm, and in cases where there was sufficient water, into the farm drains that I suspect probably led to the many ponds dotting the property. Ivy mentioned that they had enough water to run the farm for 3-4 months, which is very impressive, considering all the plants they have to maintain. 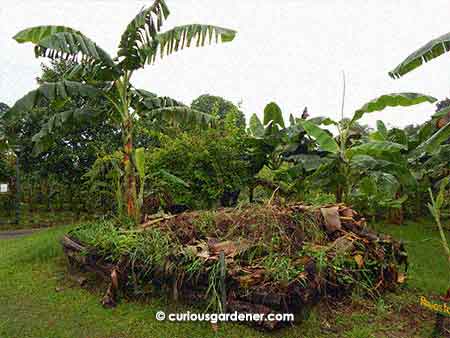 Banana plants are heavy feeders, and here they have built a compost pile right next to the plant.

I was of course attracted to plants that I’ve tried growing, and was interested in seeing how they organised the place. There were pumpkins, bananas and beans; flowers and herbs and fruit trees. The farm is quite sprawling, and no thanks to the weather, we did not cover everything. However, it was really nice to just be out amidst all that growth and appreciate all the things they are doing to be ecologically friendly. 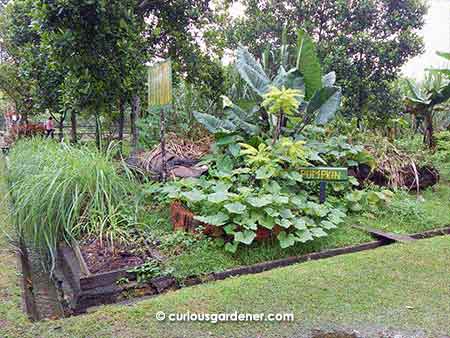 Pumpkin plants are also heavy feeders, and here is a very healthy looking plant growing on the side of another compost pile.

Here are some random shots from around Bollywood Veggies… 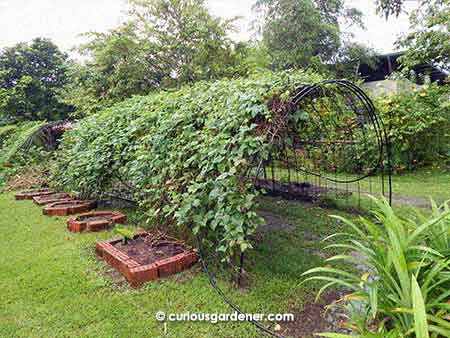 Nice large arched trellises for winged beans to grow on. 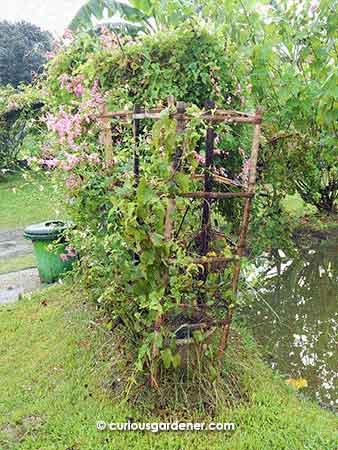 Rustic trellis for the Honolulu creeper to climb on. They had several varieties of the flowers, including a white one I had not seen before. 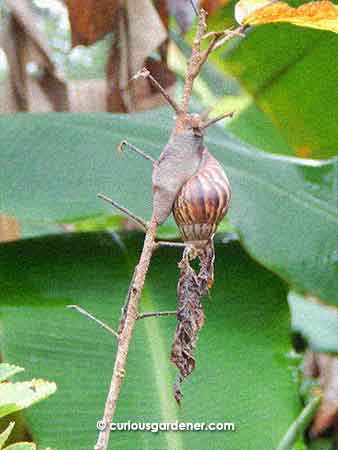 It was such a wet day that even snails were trying to get off the sodden ground! 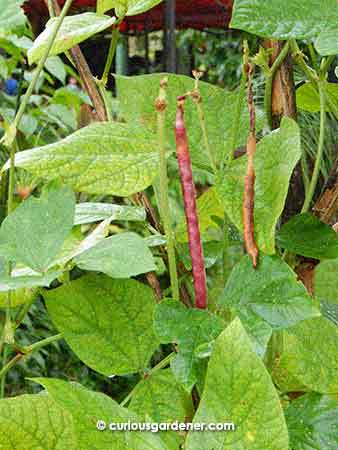 Purple long beans were growing up a shrub that had died but worked as a great trellis. 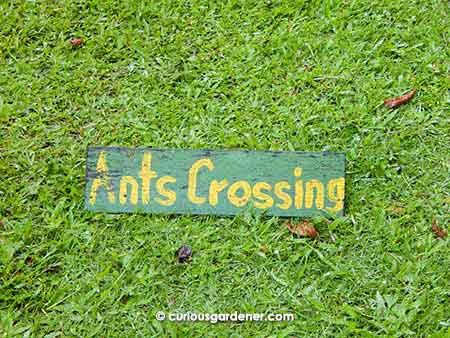 I thought this was a little whimsical, set along one of the paths, but there really are ants around the farm, and they bite! So I was told. 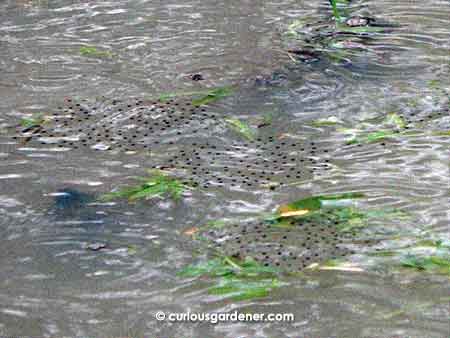 The ponds had lots of frog eggs floating on the surface of the water.

There were too many flowers and fruit trees to post here, so here’s one that I really liked…. 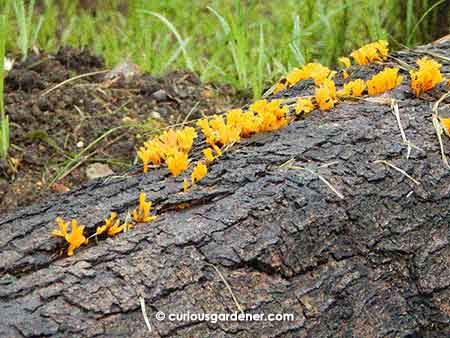 With the weather remaining sporadically wet, we decided to head for an indoor venue at one of the fish farms, followed by a very quick stop at Hay Dairies for a peek at the goats (think overwhelming smell of mutton out in the pens!) and a drink of ice cold fresh goat’s milk. All in all, it had been a satisfying outing where we had seen quite a bit, but know there’s even more to go back for. The bad news is, the farms will only be at Kranji for a couple more years, when their land leases expire. Their fate is still undecided, so we have to make the most of things while they are still there. Are you ready for a road trip without leaving the country? Visit the Kranji Countryside website for more information.

The goats at Hay Dairies.