Not that I have a fixation on sweet potatoes, but that’s one of the things currently growing in this curious person’s garden…

In an earlier post, I shared my joy of watching a sweet potato sprout from a tuber. That joy was twofold, because the more the plant grew, the more propagation material I would have. This first plant is what I call the “mama plant”, because it’s going to spawn me more plants. 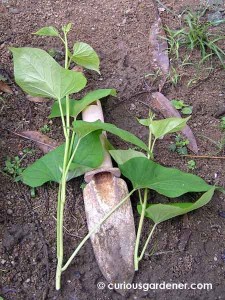 My cuttings of different lengths. Will there be any difference in the quality of potatoes (besides how deep to dig) at harvest time?

While doing my research on how to propagate sweet potatoes from cuttings, I read differing opinions regarding the length of the cuttings or slips to be planted. This ranged between 15 to 30cm. So, me being me, I waited until I could get cuttings of up to 30cm, and then I made cuttings of different lengths. What can I say… I really want to know what the difference is!

One interesting thing I noted – as Mama Plant grew bigger, the older stems began to sprout roots at the base of the stems! I’ve heard that the sweet potato plant is a voracious spreader, and I guess this is one of the ways it helps itself to do so. Anyway, because of this, my cuttings that were supposed to be 30cm long were in fact a bit longer, because I wanted to incorporate the rootlets in my cuttings. The shorter, 15cm long, cuttings didn’t have any roots. However, they’re supposed to sprout roots at the leaf nodes underground – just like my mint cuttings! 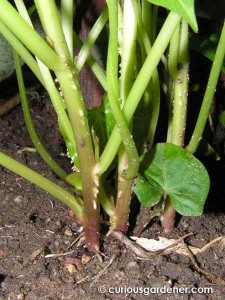 Roots beginning to form along the stems

Growing tuberous plants meant that I needed to make more preparations for the future sweet potato bed than I normally would for other plants. Yes, I’m curious but don’t want to do too much extra work. If I learn all possible tricks, I could do less work and let Mother Nature do the rest!

Anyway, I had to loosen up the earth where I intended to plant the sweet potato cuttings, and make sure there weren’t any stones or hard objects underground that would hamper the growth of the potatoes when they begin to form.

(Yes, I am optimistic that we will get sweet potatoes, unlike normal potatoes, because families here grew them for food while under the Japanese Occupation during WW2. Normal potatoes don’t seem to grow in our equatorial climate – I’ve tried!) 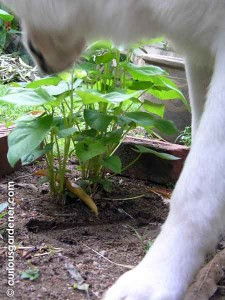 Another curious (but not a) gardener. How I wish my dogs could be trained to dig on demand! And learn not to show interest in my plants by stepping on them...

Preparing the potato bed is quite a necessary thing to do especially in this old garden where you can unearth all kinds of things like old broken bits of glass and china to rusted bits of metal and old kids’ toys. Our younger dog seems to have the nose for sniffing these things out and often digs up these treasures. She was mightily interested in my tilling activities, and for two days after I was done, “helpfully” kept digging up the bed! I had dug to a depth of about 30cm and mixed in some compost from my reliable compost heap. Then, it was time to let the bed settle and wait for Mama Sweet Potato Plant to produce her shoots. 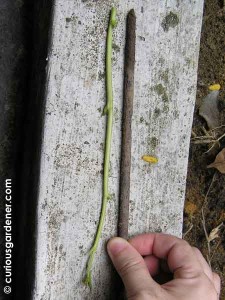 Measure the stem against a stick to help you to gauge the depth of the hole needed for planting the cutting.

It took less than a week from the first sprout’s appearance to get my stems of 30cm. Armed with small garden shears and a slim stick, I harvested my cuttings. I removed all but the youngest leaves from each stem and brought them over to the waiting bed. Sweet potato bed, that is. Using the stick to measure the length of the cutting, I poked it into the ground, all the way to my mark of the cutting’s length, before withdrawing it. After that, it was a simple matter of easing the stem into the resultant hole and tamping the earth around it. The next cutting was planted 40 to 50cm away, and so on, down the row.

It’s my plan to plant new cuttings every couple of weeks since we’re growing them for our own consumption. There’s no point in planting a whole lot of plants immediately unless we’re having a BBQ party in a few months, right? Otherwise, it sounds good to have a small harvest every other week or so, without having to store them for too long. Since this is my first time growing sweet potatoes, I’ll have to see how that works out. 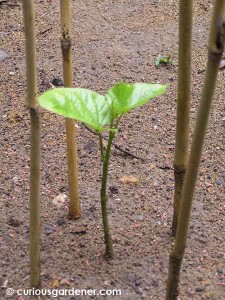 Mark your plants to protect them from marauding dogs and other gardeners ;p

Again, my research gave me mixed information as to when sweet potatoes will be ready for harvest. Let’s just say anything from 3 to 6 months. One of the signs, though, is that the stem will thicken and/or the leaves will turn yellow. At that time, you’re supposed to start digging gently, from a distance of almost half a metre from the stem of the plant, so that you don’t accidentally cut or pierce any of the potatoes underground.

Once unearthed, they may need to be washed to remove dirt or clay. Leave to dry well in the sun for a few hours, then keep them in a sheltered area to cure for 7 to 10 days if you’re not going to use them immediately. This allows the skin to toughen so that the potatoes don’t spoil easily before you eat them.

Hm, it’s March now, so it will probably be anywhere between June to September before I see the literal fruits of my labour. Anyway, rest assured, you’ll be getting updates along the way. Cheers!