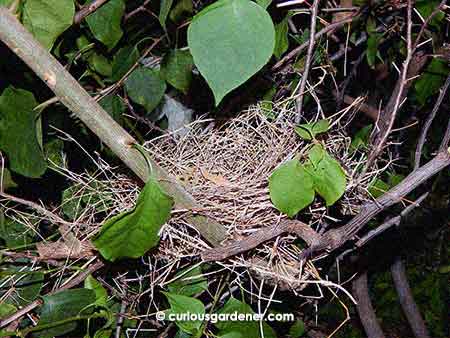 We know that some birds nest in our garden, but we can’t fathom why pigeons and doves don’t learn to pick better places to set up home.

A few days ago, one of our potted bougainvillea plants toppled over. It’s in a fairly big pot, but the plant had become top-heavy and although it had taken root in the ground, the tap root wasn’t strong enough to support the weight, and over it went. 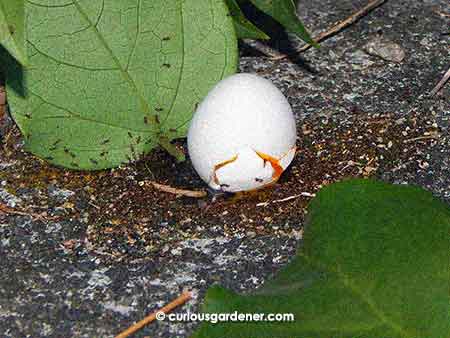 This isn’t the first time that one of these plants has fallen, and I usually start by trimming the top so I can put the pot upright. Imagine my surprise then, in uncovering a shallowly-woven bird’s nest in a crook of the plant! The birds had obviously (to me) availed themselves of the cut grass I had been drying nearby to use as mulch, so they had lots of building material to choose from. While the nest was fairly well padded, we considered it rather shallow. As a matter of fact, there was a single roundish white egg that was unfortunately smashed on the ground below. I suppose no matter how deep the nest was, the egg would still have rolled out, because the plant was 90 degrees on its side, but we were still saddened by the loss of a new life. 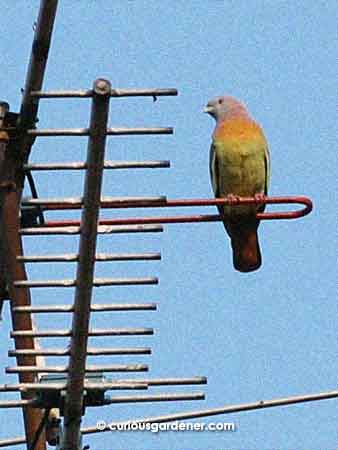 The nest belonged to the pink-necked green pigeon. We had noticed it flying in and out of the plant in the evenings, but thought it was merely roosting there for the night. These birds have, in the past, nested in our mango tree, and I suspect the palm trees as well. My mum once had the pleasure of observing the parent birds looking after a pair of nestlings, and became quite knowledgeable about the feeding routines. Perhaps I should ask her to write about it, eh mum? 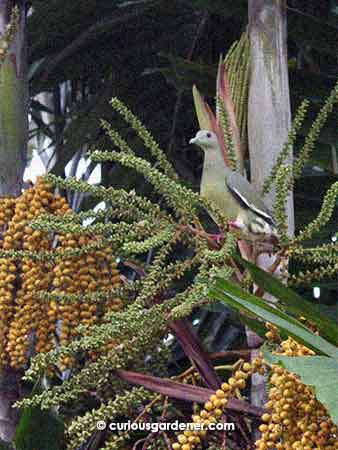 Well, we know that the birds will still be around. It’s probably in their nature to take these disasters in stride and start all over again. I just hope they choose a better location. This nest would have definitely caught the attention of our dogs because it was less than 2 metres off the ground. However, it would have given us a nice opportunity to observe the bird family life. Perhaps next time.