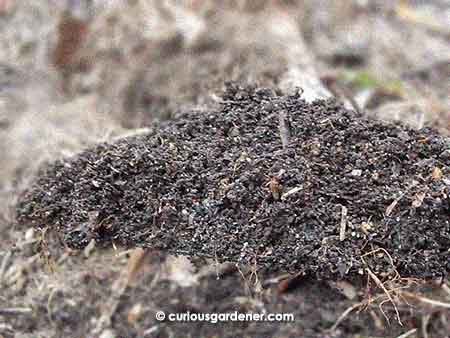 Novice Gardener may have dubbed me the Queen of DIY, but I am going to claim a new title for myself – for composting. It made no sense to me to throw away our garden waste every other week or so and pay to buy compost when I could just make our own from the garden waste while reducing what we put out for garbage collection.

We generally have a good amount of garden waste – from lawn trimmings to fallen leaves to unwanted plants (weeds to me, but pretty to others) to bits pruned from various plants. If I were to throw these away, they would amount to two to six garbage bags per week. At one point, I wondered if I could find a way to send our garden waste to the folks at Greenback compost just so I’d feel that it wouldn’t be wasted in a landfill. 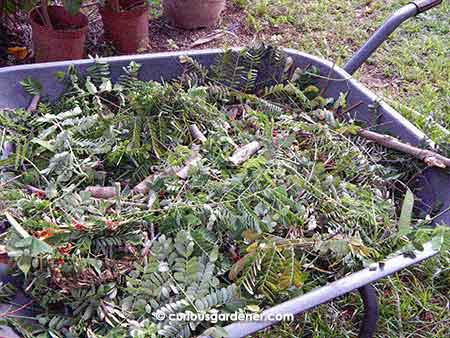 Compostable materials after pruning the Peacock trees – I cut the thicker stems into short lengths so they decompose faster (I hope!)

Then I realised that I could just use the waste myself and make our own compost, although it would take time. To speed it up a bit, I tried mowing fallen leaves into smaller pieces – because some leaves, especially from our jambu tree, take months to decompose. The effort of trying to size them down them with the manual mower was too much trouble, so I had to think again.

When adding ingredients to compost piles, I make an effort to layer green waste (grass clippings and fresh leaves) with dry and woody waste, because I want to use the “no-turn” composting method. Having the layers of twigs and dry materials is supposed to keep air inside the compost pile, which allows it to break down faster. When I don’t cut small branches and twigs into shorter lengths, the green stuff breaks down faster and falls through the twigs, so I just keep adding grass cuttings and leaves on top of the woody bits. I suppose it acts like a sort of filter. 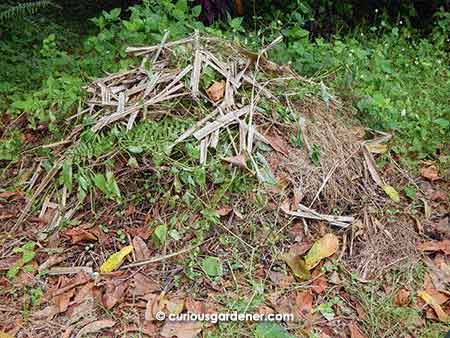 One of my compost piles. I think I’ll try some neater options in future. :-|

We also have a few clumps of palm plants, and their waste tends to be woody and fibrous. I found that quite surprising, but those nice green leaves are certainly not soft and herbaceous when they dry up – especially the stems. I’d equate them to wood because they’re that hard when dried up! I have one compost pile that’s made up mostly of palm tree leaves, and I don’t like it very much because it’s taking so long to break down – even though I’ve taken the trouble to cut the leaves into shorter lengths and have piled so much green waste on it. The thing I dislike most about the palm leaves is their tendency to collect water if placed in the wrong position. So of late, I’ve been putting those leaves out for garbage collection rather than try composting them. I’m also going to give that pile an injection of nitrogen by adding a lot of chicken poo to try to break it down faster. 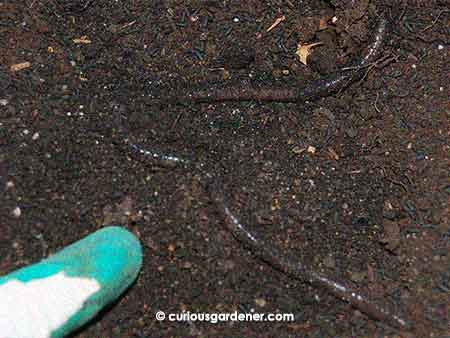 This has to be one of the biggest earthworms I’ve found in our garden. It was residing in the compost.

If I had a choice, I’d love to get a wood chipping machine or a scaled down version of the shredding machine we saw at the Greenback composting facility. Something like that would size down the bits of the palm leaves tremendously, and I assume would allow them to either decompose faster, or allow them to be used as a mulch layer. Well, I can’t have everything. Decades ago when things were less regulated, we could burn our garden waste – which is also a great way to get rid of nuisance and diseased plants. It’s a shame we can’t do that any more. Composting is my solution to the waste.

Last year, Mother Weed suggested recycling one of the big bags that my Greenback compost had been delivered in for composting. It was a great idea, and I filled that 500kg bag over several weeks, then again when the level began to sink. Actually, I kept adding to it through the year until I started a couple of other piles elsewhere. Left alone, the contents broke down to about a quarter of the height of the bag. It hasn’t broken down completely – there is still a matted top layer and some bigger pieces of matter in there – but I was intrigued to see how the leaves and twigs below had all broken down into a soft, grainy mass. (watch the video below)

I admit that my methods have become a little sloppy. It started with wanting to use the compost piles to kill off unwanted plants via mulching; but then the piles grew in size and girth, and eventually became rather untidy looking. I expect we got raised eyebrows and wagging heads from the neighbours at the messiness.

We now have home-made compost that enriches our garden, as well as much more life – not just in the soil, but above it as well. There are big, fat earthworms that are close to 20cm long and bugs that skitter away when they’re exposed to air. I wish there weren’t snails, but they do help in decomposing the leaves… Then there are birds, toads, lizards and skinks that feed on the worms and bugs in the compost piles. I know it sounds a little wild, but I’m just too thrilled to have created an ecosystem that has all these creatures in it. My main concern is to make sure that no part of the system breeds pests like mosquitoes. Apart from that, we’ve got compost, throw away less waste and are working with nature. I am content with that. 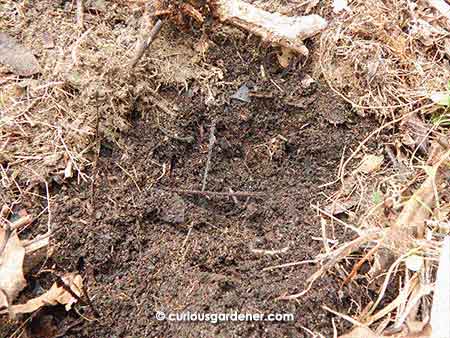 Hidden under the top layer of dried grass and leaves (I think), the compost is dark, soft and grainy. I feel such joy knowing it’s from a combination of our free green waste and time!