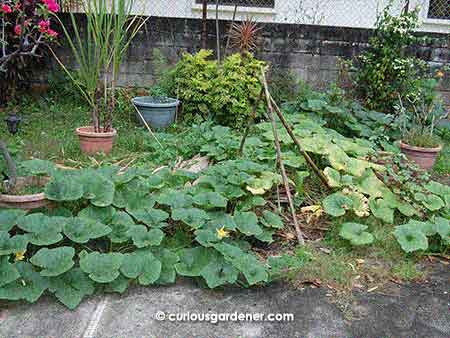 Our pumpkin patch. I don’t know why I expected it to grow docilely along the side of the garden…

Looking back now, I feel so naive when I remember how worried I was that our pumpkin vine wouldn’t have enough flowers for pollination. The single vine has grown and branched out so much that it has become a rather impressive pumpkin patch all by itself.

As a matter of fact, I think the two new plants I put in with the original plant may be completely shaded out unless they grow faster. However if they do that then I’m going to have a pumpkin jungle on my hands…

Throughout December, a number of flowers came and went, both male and female, and usually not at the same time. I had a few goes at hand-pollinating the fruit flowers when the right flowers were around, but they all aborted. 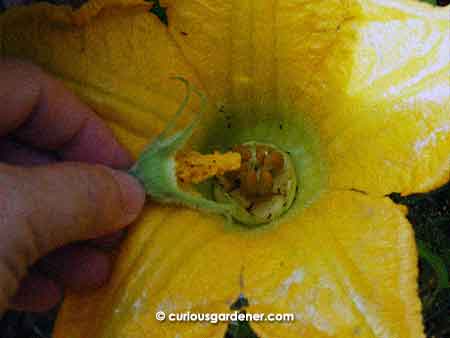 One of the several attempts at hand-pollinating the pumpkin flowers. Notice the tiny insects and ants? Neither did I.

I don’t know if you remember, but I mentioned that the pumpkin plant had grown towards and over a nearby compost pile, which I thought was cunning of it, because of the nutrients in that heap. However, when our gardening guy visited to assess the jambu tree, he made a comment that didn’t strike me immediately. When he saw the pumpkin plant growing over the compost heap, he said that the decomposers in there don’t differentiate between living plants and plant waste. It didn’t make sense to me because obviously the vine was thriving with really thick stems and such huge leaves that just one could be used to shade an adult’s head from the sun.

However, when those many fruit flowers failed to set, I paid more attention and realized that all those ants and other insects I saw clustered inside the flowers were not necessarily pollinators – they were destructors, killing the flowers from within. 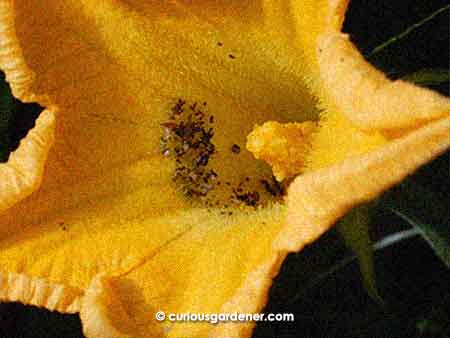 Invading ants bringing a cluster of their allies with them. Blah.

Since then, I’ve been encouraging the vines to grow away from the compost, although this means encroaching on area I didn’t plan on using for the pumpkins. The plants (I’ll assume the new ones are still growing somewhere in there) are already taking up a few square metres of real estate, but I’m more interested in successfully growing pumpkins, so am willing to make the sacrifice for this crop. 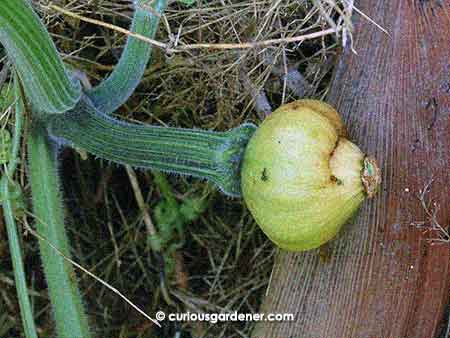 I guess when the insects inside the flower kept munching their way through, they reached the underside of the fruit itself and just kept going. Now seeing the fresh garden waste just beneath the plant, I realize my mistakes – firstly in continuing to add to the compost heap right next to to my growing plants, and secondly, in not training the pumpkin vines away when they started growing in that direction.

So, I’ve been focusing my hand-pollinating efforts on the parts of the vine away from the compost and bad insects. There are quite a number of fruit buds and flowers, and this week it looks like the boys are getting into the action as well. In an effort to keep the insects out, I tried a method I read about – to peg shut the flower buds about to open so that you stop insects from entering and cross-pollinating them. In my case, I just wanted to keep the insects out so I could hand-pollinate and seal shut the fruit flower long enough to let it set fruit. I tried, but little ants are very good and getting through tiny nooks and crannies…

I got so frustrated that I finally resorted to threatening the plant. If it didn’t set fruit within the first two weeks of the new year, I told it (several times) that I would massively prune it so I could clear away the compost pile and let it start all over again.

Guess what? Threats do work on plants! 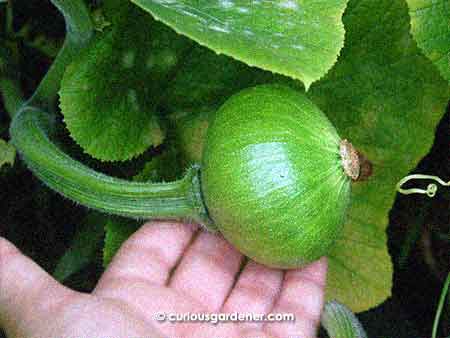 Where did I discover this fruit? Well-hidden under the leaves and nestled just inside the flower pot that the mulberry plant is growing in, which the pumpkin vines happily draped themselves over and around.

The pumpkin patch is so thick that I have to keep peering through the mass of leaves and wade in if there’s anything to pollinate. Naturally, I miss flowers, and naturally the fruit that finally set did so by Mother Nature’s hand!

I still may prune the parts of the plant over the compost heap if the other ends of those vines don’t set fruit, but for now it looks like I can just leave it be.