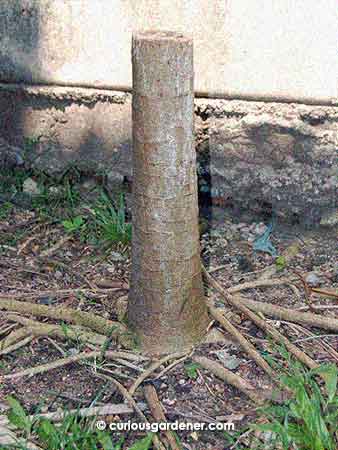 The neatly cut papaya tree stump. Just look at that nice, straight cut across the top – all from swings of the parang.

Back in July, I decided to put one of our Red Lady papaya trees out of its misery. It had not been growing well and was constantly infested with mealy bugs. Since it was also about 4 to 5 metres high, it was not easy to treat it, and it made more sense to rid the garden of an unhealthy plant.

Culling it was easier than I expected. The trunk of the papaya tree is soft and pithy, and it took only about half an hour to not only chop the tree down, but to also cut it into smaller lengths for disposal – all with a simple parang or machete. I was also quite impressed with my cutting skills, so I left about half a metre of the stump to be able to admire the nicely lopped top. 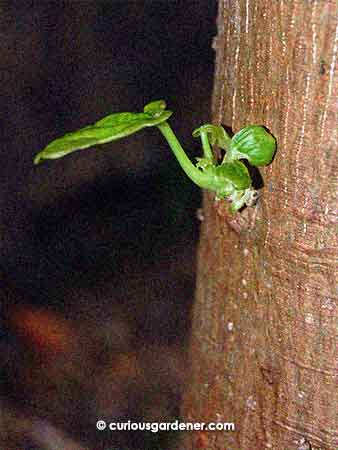 One of the new stems growing from the stump.

About a month later, I noticed a few spots of green appearing on the stump. It was growing new stems! I was so fascinated by the baby leaves, which I had last seen when the plants had started growing from seeds.

The stump continued to grow several new stems, and I was intrigued, because I wasn’t sure whether this variety could do so, and if it would become a fruit-bearing plant again. 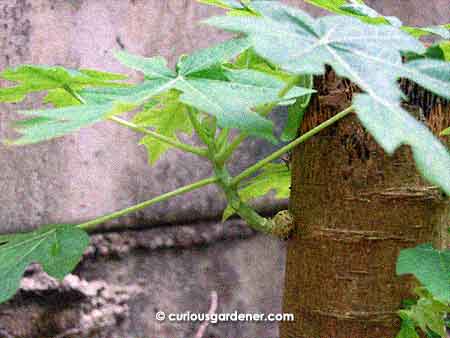 Two months after chopping down the tree, the stems were this big.

Then, because there were several stems, and because I can be very curious, I decided to break off a couple of the stems and see if they could grow from cuttings.

As with all cuttings, I snipped off the older leaves and kept the younger leaves before potting the stems. 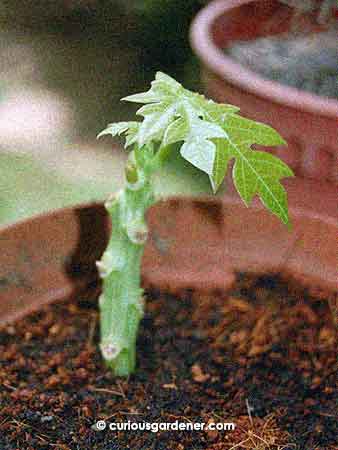 The cutting when I first potted it. I kept only the new, youngest leaves.

One died, possibly from overwatering, but the other is still apparently alive. I don’t see any roots growing, so it could be sustaining itself with whatever stored food/energy within its stem. It may take several months more to know whether this will work or not. 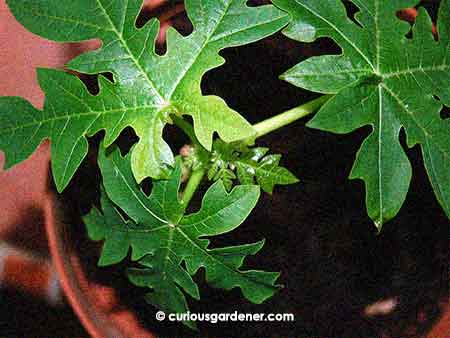 The same cutting after 2 months – the leaves seem to be maturing, and new ones appear to be developing – but I still see no sign of roots growing (yes, I pull it up once in a while to check).

In the meantime, the other stems on the stump are continuing to grow. The middle of the trunk is rotting away, though. It looks very crater-like as the soft centre alternately gets wet in this weather and is “cleaned up” by snails, and is getting deeper and deeper. I don’t know if it will rot to the extent that the plant will die off or not, which is why I’m experimenting with the cuttings. After all, I know this is a hermaphrodite tree, which means it doesn’t need pollination from a male tree, which makes it more valuable to me. I don’t have any more viable seeds, and the last few attempts at doing another mass order at the GCS forum didn’t have enough takers (the minimum purchase of seeds has too many seeds for the home gardener in Singapore and is also rather expensive, so it’s wiser to do a group purchase), so I had given up on the idea of getting more seeds and just keep our last 6 metre tree until it falls over. 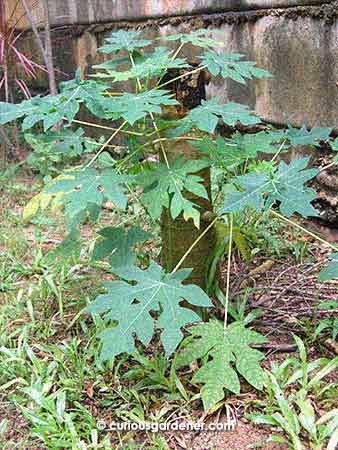 The papaya stump looking rather bushy now with several stems maturing on it.

The stump currently has several more stems that I’m eyeing as potential new plant cuttings. I think I will leave just two stems to grow on it, if it survives. Any more than that and I think it would be too crowded to grow in the space. Since the papaya tree seems to be a rather slow-growing plant, I’m going to have to be patient to see what happens next.