As a child, I associated the word “toadstool” with the image of a toad cosily sheltered under a nice, wide-brimmed mushroom. Of course, the fact that you’re supposed to sit on a stool didn’t matter to me then – it was just the picture of it that I liked.

Fast-forward to the current day, and the equivalent of toad shelter is much different. Not too long ago, there was the resident under a tilted box. This week, I discovered another toad haven – under the large bag that the half ton of compost, mostly finished up, arrived in.

As we used up the compost, we had folded the edges of the bag downwards to get to the compost right in the corners. That created a few pockets and folds that I knew snails would probably find their way in to. I certainly did not expect to find a toad, though! 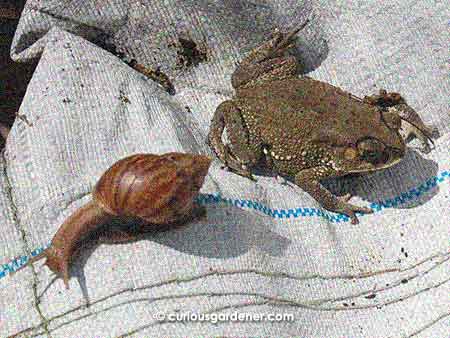 In this impromptu race between the toad and the snail, the snail won because it took a headstart!

I discovered the warty visitor when I decided to shake the last bit of compost out of the bag. It was when I was unfolding it – which is not as easy as it sounds because the bag in BIG and the material, a little stiff – when I suddenly saw a big fat toad sitting on the bag in front of me, looking rather stunned at suddenly being in bright sunlight. I think I may have jostled it a bit when I was moving the bag around as well, the poor thing. It was shocked enough to not move for almost 5 minutes, giving me ample time to get the camera and take some photos. Even the snail that I also uncovered next to it got away faster than it! It looked so shocked that I took pity on it and shifted the bag so it was again sheltered from the sun.

That was when I saw the second toad. It was smaller than the first – just a juvenile, I’d say. Rather than traumatize them more, I decided to leave the bag there until it got dark. The toads would have to find other nooks to hide in the next day… 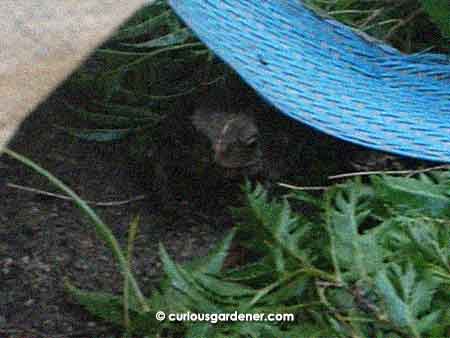 The younger toad looking worried that its shelter would be ripped away. It wasn’t. Then.

Just to put this into a little more context, I should mention that this bag was sitting right next to the compost heap, which is quite rich in life. There are various insects as well as worms, and I guess it’s a smorgasboard for creatures like the toads. Unfortunately for them, I will be reducing such areas in the garden in the near future, so they will probably migrate again to the areas where the compost will be then. After all, in nature, creatures go to the food sources.

I can’t remember what book I read, about having areas in your garden to attract beneficial creatures, but it did include a point about having a pile of rocks – or was it sticks? – as a hideaway for toads. It looks like they will just find somewhere suitable and set up home.