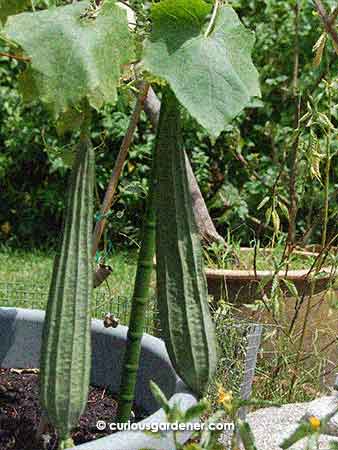 What I like to see – lots of fruits growing in the garden! Angled loofahs in this case.

Our angled loofah plants have been doing rather well. I planted a pair of plants in a large pot to see if they would fare better than those grown direct in the ground. The latter only lasted about two months before they became unproductive, you see. So I used one of my largest flower pots and added a large-scale tomato trellis for the vines to climb up. The plants seemed to like it.

Of course, there were some stems that died out along the way. I diligently pruned them away and kept the plants alert. It seems to me that when you don’t “interact” with the plants, they decide to move on to the great compost heap in the sky… well, our garden, actually… 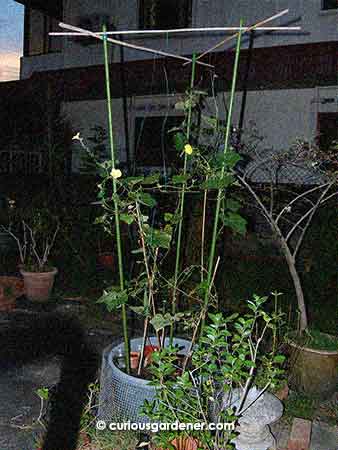 The loofah plants with their giant tomato trellis. I’m surprised it worked so well for them!

So I guess you could say that these two plants have surpassed the ones I’ve grown in the ground. It could be because I’m paying more attention to them, especially in watering them. Potted plants are especially at risk when you forget to water them because when the soil dries out – especially if the pot is on a manmade surface – they have no other source of water unless it rains heavily on the plant, which it probably won’t. Not sufficiently, anyway.

It also appears that the pot is large enough that the plants are not confined and root-bound yet. This has surprised me, because in my past experiences with the loofah plants, they have usually lasted about two months or so before the vines died out. I had anticipated this and germinated a new pair of loofah plants that I planted into the pot, but the plants seem to be happy enough to keep going – for now, anyway – so I hope the young ones will be able to grow without feeling constricted by the older ones. 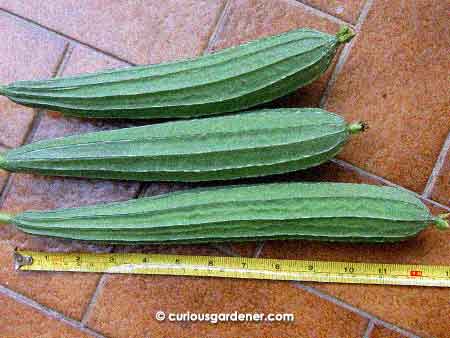 Our loofah harvest this week – not too bad, eh?

We’ve had a pretty good harvest from the plants, and I’ve noticed that the fruits – while not as large as the commercial ones – have been bigger than what we normally get from those planted in the ground. I suspect it’s because I grew the plants in a good, organic soil and also because they’ve been getting more water than the ones in the ground did. (I tend to like to leave things too much to Mother Nature at times…) Ah well, live and learn.