A fortnight ago, when the trellis began to be pulled inwards…

It was just a couple of weeks ago that I expressed concern about whether or not my trellis add-ons would be able to cope with the mystery marrow vine. Well, in this case of plant versus trellis, my trellis lost out.

The vine is so healthy and vigorous that both ends of the trellis have been leaning inwards as the weight of the vine on the connecting “rope ladder” pulled everything downwards. The stem of the vine is thick, the leaves are big and healthy, and new stems have been springing up along the main stem until it’s become a big mass of leafy stems. 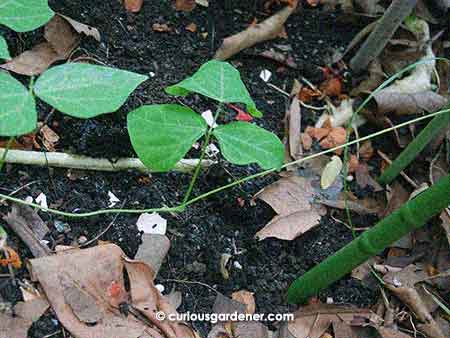 That thick stem you see across the middle of top half of the photo – no, not the jicama plant; behind it, like a green stick lying on the ground – is actually the root of the marrow plant. The main stem is in the top right corner. With such a strong root, it’s no wonder the plant is growing so robustly!

It’s partially my fault – with plants that are new to me, I usually like to let them have their way the first time around, so that with subsequent plantings, I know how to manage them better.

So, with this weighty issue needing attention (pun intended), I had to do some quick patching up to keep the vine from collapsing on top of the other plants in that veggie bed. The corn, in particular, was in the most peril, being the tallest of the plants there. 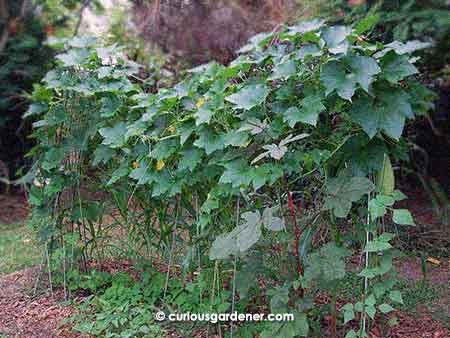 The jungle that my once orderly veggie bed has become…

I had a few flower arrangement stands, taken from the recent family event, that I decided to use for my rescue efforts. Some may call it morbid recycling, but I couldn’t pass up those sturdy metal tripod stands that were going to be thrown away anyway. They were of differing heights, and the tallest ones were put at either end of the tilting trellis to prop up the slanting stands while two shorter ones were inserted below the drooping centre to keep the vines from smothering the plants below.

It’s just a stop-gap measure. I foresee more issues and wish I had a crane to lift the centre of the mass of vines and leaves so I can slip in something much sturdier and taller to support the vine – something made of thick wooden posts embedded in cement, preferably. 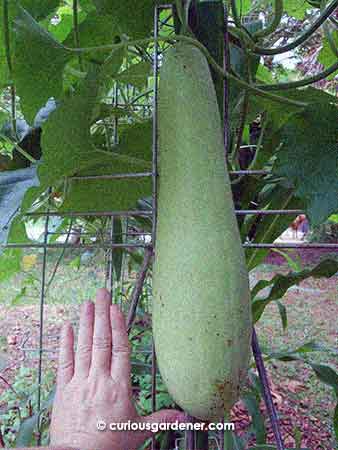 The marrow at about 10 days after setting fruit. It has been growing at an astounding rate and is currently 40cm long!!!

Apart from this worry, there’s great excitement in watching the first marrow growing. I know I once called our first winter melon the “Little Monster”, but let me just say that this marrow is probably going to be a fully-fledged “monster”!