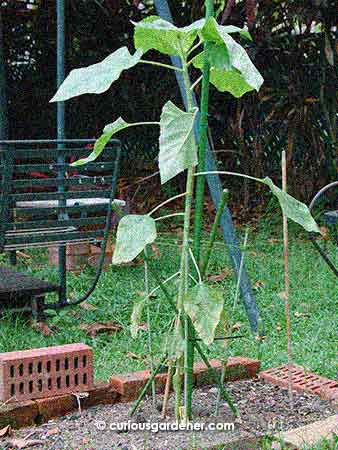 The Mongolian sunflower plant at over a metre high. So far, so good! Let’s hope it keeps growing for a few weeks more!

I had hoped to have sunflowers blooming in the garden when Christmas came around, but it seems that things are conspiring against me. The weather isn’t right, with too much rain at the moment – and too much rain brings the snails out in force. No thanks to that, I’ve gone from rows of little seedlings to rows of nothing or bare stems…

I’ve been through at least three planting cycles already, and have only two plants worth mentioning right now.

The first is the Mongolian giant sunflower. That, thank goodness, has been growing normally. It was a bit touch and go at the start when I transplanted it, because it had a rather leggy stem. I got around that by digging a deeper hole that, when filled, covered most of the leggy stem. From past experience, I know that the plant will eventually grow roots along buried parts of the stem, and that would also help to give additional support for what I hope will be a tall plant.

I didn’t dare get my hopes up too early, though, because all kinds of calamities can befall sunflower plants. As I’ve mentioned before, snails and caterpillars are big foes, as can be heavy rain that pummels young plants to death. So, for initial support, I used a short bamboo stick to tie the plant to.

When the plant exceeded the height of the stick, I found that heavy rain tended to bow the head of the plant down, so I got an ambitiously long 1.8 metre pole to add for support. If I’m lucky, though, the plant will exceed the height of the stick – it is supposed to reach over 12 feet or 3.6 metres (if my calculations are correct) – but with my track record, the odds are it won’t. Anyway, I was cautioned by the seed supplier that strong winds can blow the plants down, so the supports had to go in – and it was lucky they did because we had a couple of storms with winds strong enough to topple a large potted bougainvillea plant. 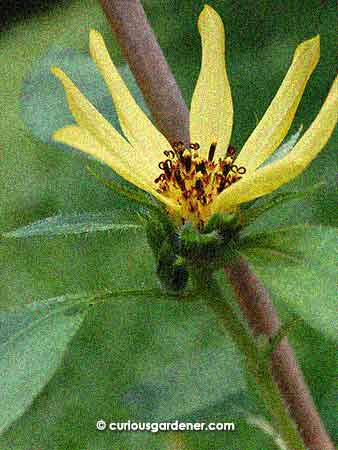 So, this baby is about a third of the way there, having grown more than a metre high. My Italian white plants became food for snails, despite my attempts at protecting them. One Moonwalker plant grew to just over a foot high before it budded. All this despite my frequent doses of fertilizers, too! The flower is a joke, but at least is true to the promised pale yellow colour. I hope the reason for the stunted plant is because it was grown from old seed stocks. I have fresher seeds that I will plant, and hope they grow bigger and better.

Oh, and I am now firmly against growing sunflowers in containers – even big pots – because they don’t grow as strongly as the ones grown in the ground. I guess unless they are the miniature varieties, they simply need lots of space for their roots to grow, and when they don’t have that, they don’t grow nicely.

So, I think I shall tone down my planting of sunflowers until the beginning of next year so that I don’t waste any more seeds. The snails will just have to find other food sources!