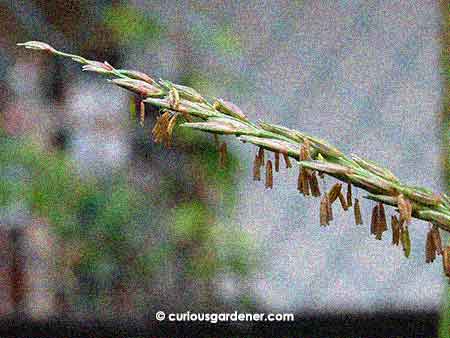 Close up view of the ripe tassels. I believe the pollen is stored in the dangling brown husk-like things. Just a light tap on the stem will release a light cloud of pollen to the air.

The Red Aztec corn plants have been busy in the last week. The tassels I mentioned earlier have grown not just on the first plant but on four! Some of the plants have just one main tassel while others have between two to five sprigs of tassels.

A search for cobs and silks turned up only one set of possible silks poking out of the top of one of the smaller plants. 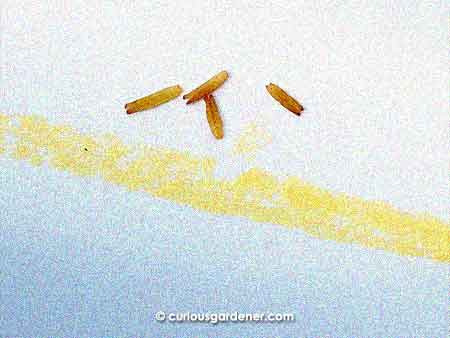 Some of the pollen I collected from the Red Aztec corn plants.

The important thing was to seize the opportunity to collect pollen while it was there. You have to wait until you see what look like dangling grains of rice husks, then in my case, I had a big A3 sheet of paper that I lightly creased and held beneath the tassels while I gently tapped the stem. This released the pollen that drifted in a light yellow cloud onto the paper below. I then quickly deposited the precious pollen into a small container that I covered immediately. It’s very windy, and I didn’t want to risk losing any of the pollen. 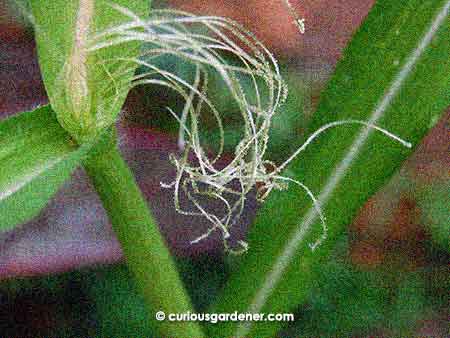 Corn silks coated with pollen that I collected from 3 different plants.

After collecting the pollen from all available tassels, I shook up the box to mix the pollen before dipping what I thought were silks in it – if it is a hidden cob then I hope it considers itself cross-pollinated! The unused pollen was covered up and stored in the fridge where I’ve been adding on more pollen as it has become available. It hasn’t been on a daily basis because of the frequent rain, but I hope to have enough ready for when the corn is ready to start developing. 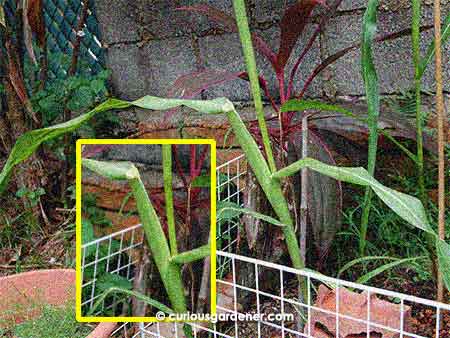 This leaf looked like a normal leaf until it started leaning away from the main stem and swelling. You can see the tip of what I hope is a cob poking from the top in the inset. I’m waiting for the silks to appear so I can pollinate them!

A cob appears to be growing now – one of the leaves has pulled away from the main stem with what looks like a possible cob beneath it. There’s no sign of silks, though. When they do appear, I’ll be ready with the pollen!

Blast from the past: Hand-pollinating corn