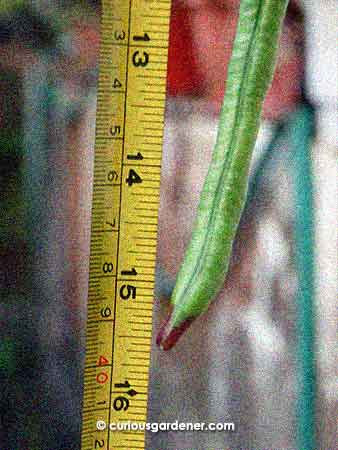 The first bean logged in at about 40cm long. It is the bean that the successive ones will be measured against!

Not too long ago, The Weeds shared some of the seeds that Grandpa Weed brought from his garden Down Under. The okra plant has already made its debut, and today, the long bean plant gets the spotlight.

It’s been interesting seeing the seeds of the different kinds of long bean that we’ve grown here – some have been brown, others cream, and now, black.

For some reason, I haven’t had the best luck germinating them. Only one plant grew, and because I was waiting to see if the others would germinate, this one plant got bigger and took root in a planting tray I had on a ledge, and grew so fast that we decided to just leave it there instead of shock it by breaking the roots. The plant managed to grow high enough to reach a hanging pot of kangkong, and it used that as a foothold and kept growing up from there…

The first bean has grown and been harvested, and was more than respectable in that the bean was thick and fleshy, and a decent 40cm long. More baby beans are growing, and I’m wishing we had a few plants producing simultaneously. I’ve sown more seeds and hope they grow fast to catch up with the first!

Thanks go again to The Weeds for sharing the seeds!