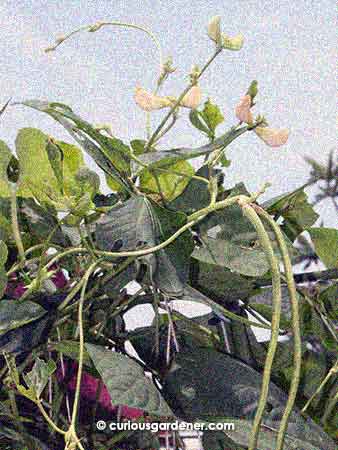 Long beans are the most common legumes grown in our garden.

Having just a couple of years of what I consider amateur crop growing under my belt, I feel there’s still a lot to learn about growing healthy edible plants. My experience has been mostly to sow seeds and observe how the different plants grow. Yes, I feed the plants with fertilizers, and yes, I’ve done some research on good growing habits, but I haven’t necessarily practised them. Bad me.

One of the common things you read about in edible plant growing is about crop rotation. The standard instructions seem to be to start with legumes, followed by leafy/flowering veggies, followed by fruits, then root veggies before starting back at legumes.

I haven’t tried a cycle of crop rotation yet, because I wanted to work on building up the soil first. That’s why I’ve been using compost and other soil-building components like coffee grounds, blood and bonemeal, volcanic soil and sheep and chicken manure pellets.

What I now realize in retrospect is that a couple of my successes could have something to do with unplanned crop rotation.

My infamous wildly growing snake gourd vine was planted at the same trellis, at the same time, as a few long bean plants. I attributed the growth of the vine to the soil preparation in that planting bed, but now I have to wonder if the long bean plants had something to do with that. 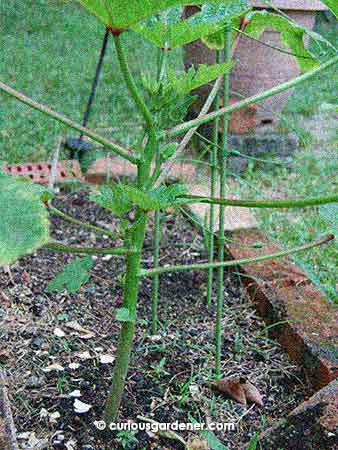 The Australian okra plant sporting an unusually (for us) strong stem and big, healthy leaves (out of shot).

Bean or legume plants are known for their nitrogen fixing capacity. Nodules form along the roots as the plants grow, accumulating nitrogen. When the plants die, you’re supposed to cut off the main stem and allow the roots to decay in the soil, where they will release the stored nitrogen to the next round of plants.

I still have the habit of uprooting my spent plants, and have to consciously remind myself to not disturb the soil and remove the good nitrogen-laden roots every time a cycle of bean plants is over. So this was what I did, and the snake gourd vine flourished. Were the beans responsible? Probably.

Another example is the planting bed where the Simba beans were growing. The bean plants followed brinjal plants, and after the bean plants died prematurely, I replaced them after a week or two by a pair of Australian okra plants. One of the okra plants was bent by rain, and subsequently eaten by snails, but the other grew very well. The stem is stout and strong, and the buds and fruits look nice and healthy. In fact, the harvested fruits have been tender and sweet.

Can I conclude that the preceding bean plants had something to do with this? I’d like to think so. Will I make the effort to try crop rotation in at least one planting bed? For the sake of knowing the answer, I’d say yes. The question of when I’ll do this is a good one, because I like to experiment, as opposed to taking the disciplined approach. Don’t start holding your breath just yet…