It’s been over a year since I ordered that literal ton of GreenBack compost for my garden, and I’ve been watching the last 500kg bag dwindle more and more with a sour look on my face. I’ve become very used to having that bag of compost to dip into when I’m creating a new gardening bed or potting a new plant, so not having a supply of it was an unappealing thought. 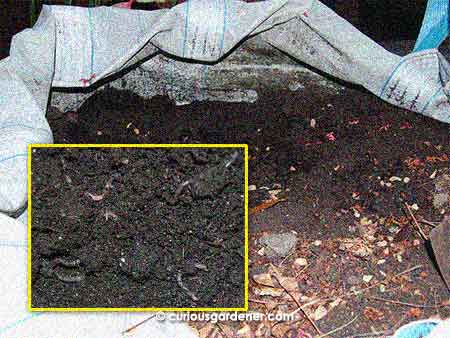 The last of my first order of compost, with the worms in the inset.

Every time I scoop out compost from the bag that has been sitting out in the garden for all these months, I am reminded of how rich it is. It is full of life – earthworms have migrated into the bag and have been happily breeding there. There are also countless white beetle grubs, flat little cockroach-like beetles, as well as (thankfully) a few centipedes at differing life stages. I’ve also seen the Oriental garden lizards stake out the edge of the bag, probably waiting for easy prey in there.

If having such fertile soil attracts so much beneficial garden life, then I want more of it here. (I may have said that before, and I’ll say it again, I’m sure!) So, I was considering placing another order for compost in the near future. The thought of the huge delivery lorry was daunting, though. Although the half-ton bags are very worth what you pay, I still had to think twice. 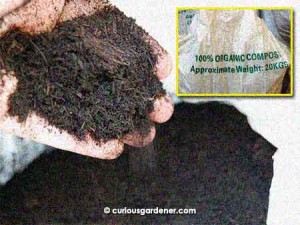 The decision was, however, made for me when I received a SMS from GreenBack informing me that they were making free deliveries in my area this weekend. The largest pack that they were delivering was 20kg, so I decided on getting a few of them – enough to tide me over for the next few months anyway.

I recall a comment on the gardening forum that the compost was still “green” and too alkaline when they used it it immediately, but haven’t encountered that issue myself. It’s probably because I prefer to mix it in with other soils to create the consistency I want, or because it’s been open to the elements where it has matured naturally over time. I will probably keep one of the new bags aside for potting purposes, and either use the rest immediately in planting beds or as a top mulch that will break down and fertilize the plants, or pick a spot to deposit it to let it mature naturally. No doubt it will attract all kinds of creatures, but not all creepy-crawlies are bad!

So, I don’t feel so reticent about using up the last bit of compost in the big bag now, because I have new sacks of “black gold” in reserve… Hey, at least they could deliver them without blocking half the lane and go through the hassle of using a crane to move the compost – this time, all that was needed was a push trolley!