I’ve been trying to grow new cucumber plants for several weeks, but nothing happened, making me wonder if the seeds had already lost their viability. However, I acknowledged that it has been rather hot lately, and the seeds may not have had enough moisture to germinate.

So, I got out my thinking cap and made an on-the-fly self-watering pot: 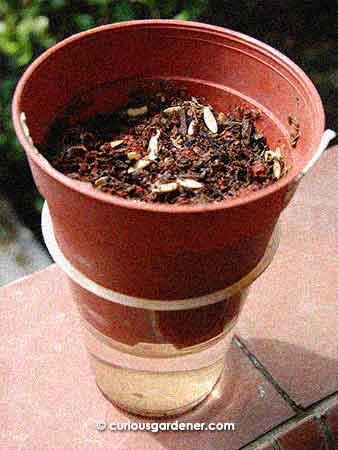 My impromptu self-watering container: I was lucky that the small pot fit nicely into the plastic cup!

One of my smaller plant pots fits nicely into a plastic cup – the important thing being that it is not so top-heavy that it will keep toppling over, even without the weight of water in the cup below. I filled the pot with Tref because I needed a fresh potting mix, and scattered cucumber seeds around the top, barely covered. I then filled the cup with water and sat the pot in it, displacing some of the water in the process. When the soil still looked dry after a while, I added more water to it gradually, until it remained shiny and wet.

Over the next couple of days, the water in the cup decreased slowly through evaporation, but the soil in the pot above remained damp. 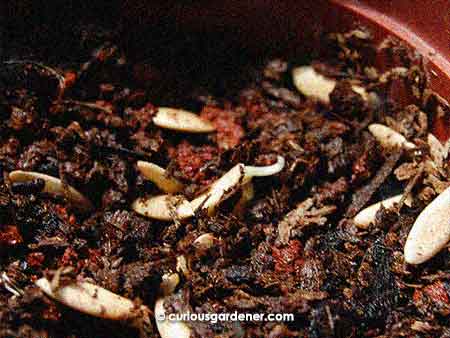 The first cucumber seed finally starts to germinate, so I know the seeds are still viable!