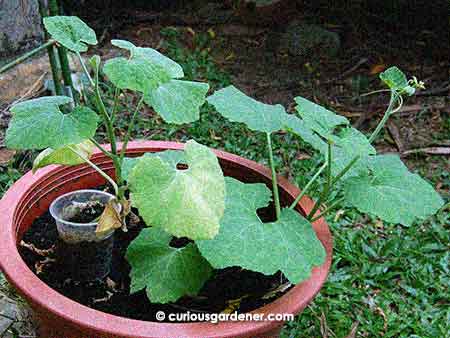 Two shark fin melon plants from the same germination batch. The one in the big pot was transplanted when it had the first set of true leaves. It has reached tendril stage (top right corner).

This is the furthest I’ve managed to get with the Shark Fin melon plant. The previous plant adopted from The Weeds died off after growing about ten true leaves. Since then, I’ve grown four plants from seed, and they have been growing normally.

One was transplanted to a big pot quite early in its life. After the bad experience with the other melon plants, I’ve decided to grow subsequent vines in pots. This first was re-homed early because I wanted to test how it would cope. 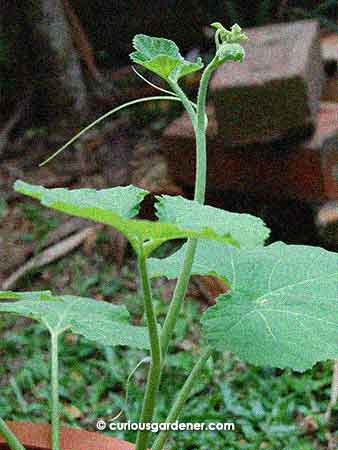 There are two sets of tendrils – the pair at the apex and the single one lower down.

Well, as usual after a move, the plant seemed to slow down while it got used to the new home. In contrast, the other plants kept growing quite strongly in the growing cups, and I got worried for a while. Then, the first transplant started growing again, putting out bigger leaves, and now it has finally started putting out tendrils. The others haven’t started that yet. I take it that I’d better get a move on and move the other three plants before they get too root bound.

It’s quite exciting to see these plants grow and mature, because I have doubts as to whether they will be able to grow here, especially with our traditionally hottest, driest months almost upon us. At the least, they will provide ground cover or compost content…