This is where I have to out myself for being a procrastinating gardener. I started a few passionfruit plants from seed in December 2010. Four germinated in January 2011 and grew very willingly in little plastic germinating cups. I decided to let them grow bigger in black planting bags while I figured out a permanent home for them. 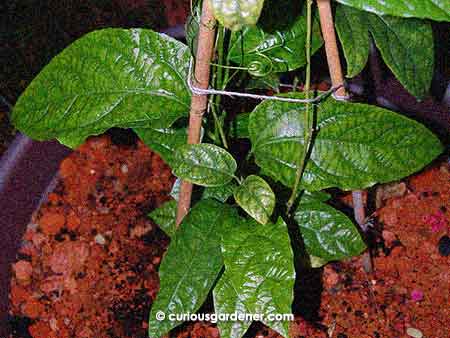 In the centre of this picture are the leaves from the plant that had grown while it was in the growing bag; surrounding them are new leaves that have grown since the plant was transplanted to the new, big pot. What a difference, eh? Size DOES matter!

As you may or may not remember, my usual lament is finding a suitable location for my climbing and creeping plants to grow up onto…

Well, those plants made it from the germination cups to the growing bags, but that’s where they stayed until June 2012.

The plants initially grew well, then slowed dramatically when they realized they were confined. They did keep growing new leaves and discarding them, and they even began to put out tentative tendrils, but the roots didn’t break through the plastic or even creep out, as other plants try to do. I was surprised by their cooperative nature.

A few months ago, I gave one of the plants to The Weeds, and a chance visit to a plant nursery gave me an idea of how to house the other three plants without allowing them to go wild like our snake gourd and Bauhinia Kockiana vines: 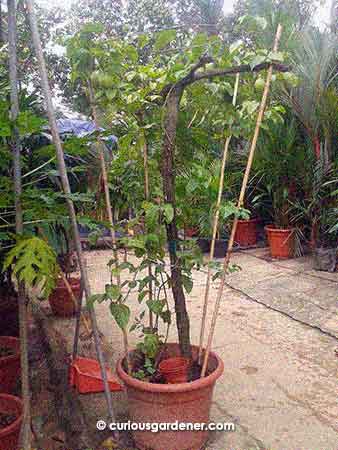 The self-contained trellis idea I got from a plant nursery. I initially thought that the thick stem was the plant’s, but it’s just a support for the plant to grow on. It’s a great idea, though!

With a plan in mind, a visit to Toyogo yielded huge flower pots, and another visit to the plant nursery got me a LOT of bags of Indonesian burnt earth. They advised me to use the burnt earth together with chicken poo to pot the passionfruit plants, but I felt that the plants deserved more, especially after their lengthy confinement. I added matured compost, coffee grounds and bone meal to the mix, and arranged the three pots in an arc around our big Bird’s Nest fern, where I intend to replicate the arrangement I’d seen at the nursery. It’s my hope that they give more shade to the fern that suffers from the full blast of the sun on hot days. 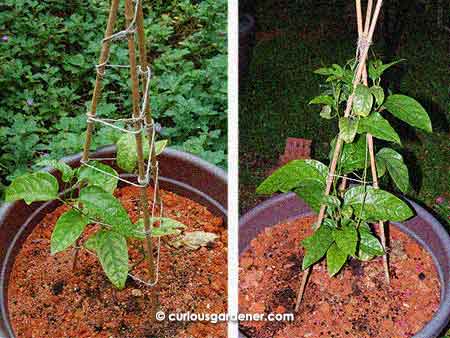 On the left is one plant just after the transplant; on the right, see how much it has grown after two months! As they get bigger, I’ll add on the higher growing supports.

The plants seem to appreciate the space and new digs. After months and months and months (and months) of barely growing any more, they have started growing longer stems and have been branching out. What’s more, the size of the new leaves is more than double the size when the plants were still in the growing bags. I think the new big pots have allowed them to reach their full potential, but I’m not sure whether they will be able to flower and fruit before getting confined in the pots. Time will tell.