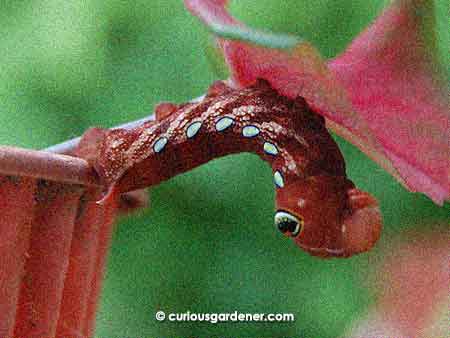 The caterpillar when initially discovered. This was the third leaf it had attacked.

I usually campaign against caterpillars because they tend to destroy plants I like. Well, this caterpillar did indeed consume part of one of my favourite red caladiums, but what it had in its favour was that I thought it was a really pretty colour – and that I’ve only seen one of them before.

I’m not an expert on butterflies, moths and caterpillars, so I can’t identify this caterpillar. But, based on the patterns and the little “tail”, I suspect it’s related to the Hawk moth. We usually find its green kin on our regular caladiums. 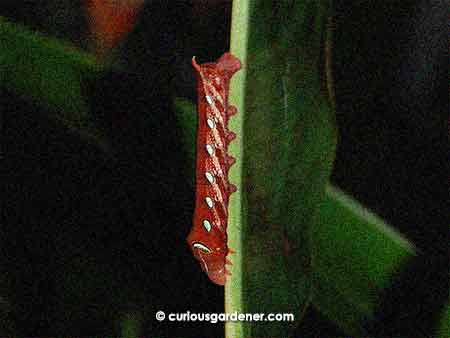 The caterpillar in profile on the heliconia plant.

Since my heart was too soft to directly kill such a pretty specimen, I transferred the caterpillar to the heliconia patch. Yes, that may have sentenced the caterpillar to death by removing it from its chosen food source, but who knows, it may have been able to go into early pupa-hood if it wasn’t able to find anything else to eat. Going by its size, it was more than half-grown. If I had more of the red caladiums, I may even have allowed it to keep feeding on the plant. Too bad it picked the one healthy plant growing in our garden – caterpillar versus caladium: plant wins.