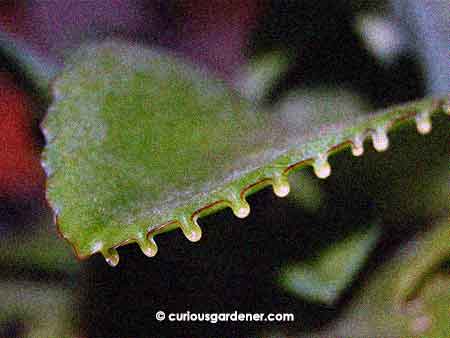 The little nodules forming along the lower edge of the leaf will soon develop into plantlets. For some reason it reminds me of the rim of a Mexican hat!

This started out as one of those situations where we saw a plant at a friend’s house that was so cute that we had to have it. The draw of the plant was the tiny baby plants that were growing along the outer edges of the succulent leaves. Of course, we didn’t know the name of the plant; it was simply known as so-and-so’s plant. Finally, though, we learned that it was known as the Mother of Thousands, or kalanchoe (pronounced “ka-len ko-ee”) daigremontiana.

Under our fumbling care, that first plant died, and was replaced by a new plant from another friend whose plant was living up to the plant’s name and producing lots of little plantlets. We were happy to have the healthy juvenile plant, and put it with our semi-shaded plants on the porch floor.

One day, though, we noticed that the leaves were being eaten. There were arcs eaten in from the edges, and neat, round holes and depressions in the leaves. I thought beetles were responsible, and sprayed the leaves with the necessary repellant. It didn’t work, and so I went through a few different pesticides before we finally discovered the cause of the holes… 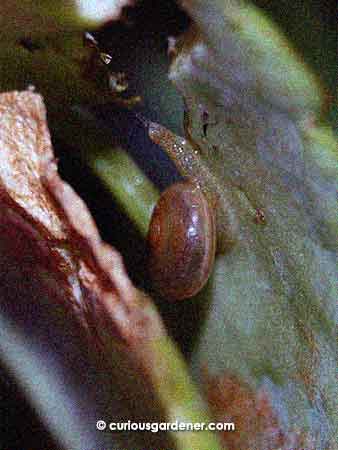 One of the many culprits eating up the kalanchoe plant.

Baby snails, to be more precise. Like the man-eater from the song of the same title, they only came out at night, which is why it was so difficult to identify them.

I suspect a very clever snail laid eggs in or near the pot when it was on the edge of the porch close to the garden.

The little snails were very adept at hiding. Some could be seen on the surface of the soil, enjoying the shade during the day; the smallest ones also clung to the inside sides of the pot just below the surface of the soil. They could be seen when the soil was a little dry and pulled away from the sides of the pot. But were they spotted on the plant itself during daylight hours? No. 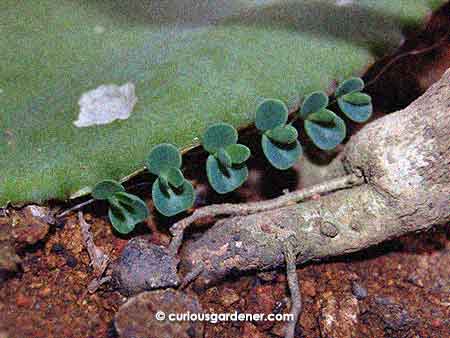 One of the kalanchoe leaves dropped off, but it had some plantlets forming. I placed it in another flower pot, and the plantlets kept developing, sustained by the parent leaf. Right now, each of the plantlets has a few roots trailing to the soil below. Now that’s what I call plant survival!

I went a little overboard to get rid of the snails. The first thing I did was place the pot in the middle of the driveway on a scorching hot afternoon. The second thing was to mix up a salt water solution and completely drench the soil with it. This is a little cruel, but since snails can be killed with a sprinkling of salt, and I wanted to try to get rid of any baby snails hiding in the soil, I had to be a little drastic.

The problem with this was that the plant had a bit of a shock with the heat and salt water treatment. However, after a couple of days of heavy watering to wash out the salt, and a couple of weeks back in the shade, it looked happier once more.

Was the war won? Not quite. The leaves are looking a little eaten again, so I’m going to try to lure the snails out with some snail bait and hope that does them in once and for all. Failing that, well, there are a few baby plants growing in a different location that is currently pest-free. And if we do lose the war, I know my friend still has more kalanchoe babies to foster out.