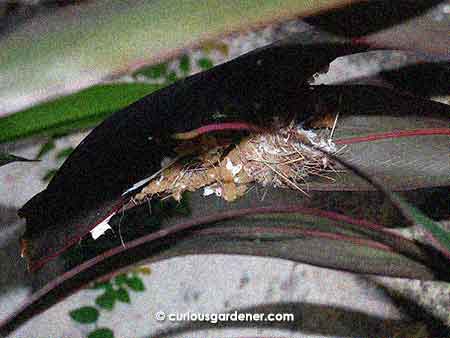 The bird nest attached to the underside of a cordyline leaf

We get a lot of birds visiting the garden every day – mynahs, black-naped orioles, sparrows, pigeons, bulbuls and so on. I barely noticed them until I began to take photos of them. It was only then that I learned their identities and finally managed to distinguish between sunbirds and tailorbirds. Both of them are small and swift, and are easily mistaken for the other.

Well, my mum discovered a nest yesterday, and thought it belonged to the sunbirds, because she saw a pair of small birds swooping around the area in a protective manner. The only way we could get a good look at the nest was to quickly go in and snap some photos, then do some online research – so that’s what we did.

The first thing I did was to look up how sunbirds build their nests. This was what I found at the sunbird page at the Mangrove and Wetland Wildlife at Sungei Buloh Nature Park site:

They (Olive-backed sunbirds) build a hanging flask-shaped nest with an overhanging porch at the entrance, and a trail of hanging material at the bottom end. Materials used include plant fibres, mosses, spider’s web. The nest is lined with soft fluffy seeds (e.g., kapok, lallang grass seeds). The outside of the nest is often untidy and decorated with lichens, dead leaves and seed cases.

The nest was untidy and had white fluffy stuff poking out all over the place, but I wasn’t convinced. Just to be sure, I decided to look up tailorbirds on the same site, and this is what I found:

(Tailorbirds) sew a pouch of green living leaves for their nest. First, the leaf is curled together by twisting spider web strands around it. Then the edges are joined together by making tiny holes on the edges of leaf with their pointed bills. Through the holes, they lace through fibres from bark, cottony seed fibres (e.g., kapok) or spider webs. The opposite ends of these fibres are teased into balls (not knotted together as some suggest).

Looking more closely at the construction of the nest in our garden, I was forced to change my opinion. 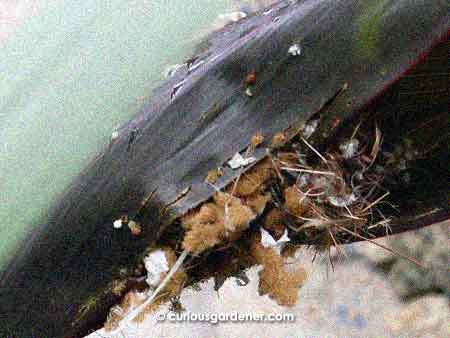 Looking closer, you can see how the birds seem to have sewn the nest onto the leaf.

Not only was the leaf curled inwards and pierced in several places like it had been sewn, but it had also been joined with another leaf to complete the nest: 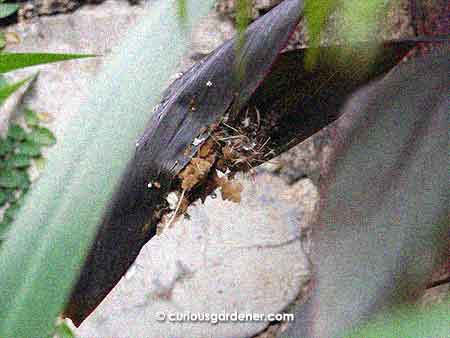 The main stem of the cordyline is on the right. See how the birds joined the two leaves at the ends and padded up the nest to open at the right?

How ingenious is that? The tailorbird lives up to its name by sewing its nest!

My concern about this nest, however, is that cordylines discard their leaves after some time, from the base to the crown. I hope the birds will be done with the nest by the time that comes around.

And just so you know what the tailorbird looks like, here it is: 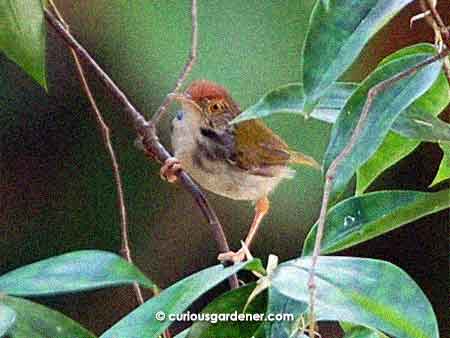 And, just in case you wanted to distinguish the tailorbird from sunbirds: 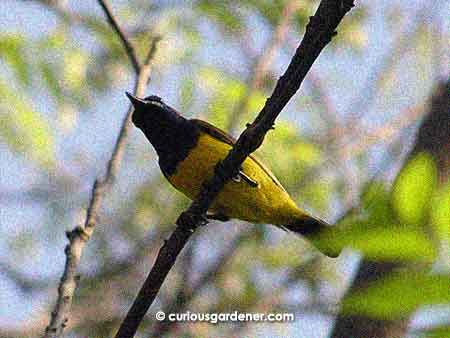 The male sunbird is identifiable by the black "bib" down its chest. 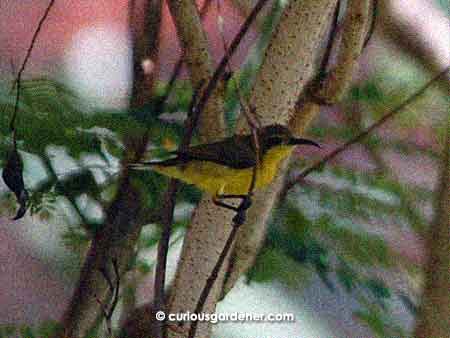 The female olive-backed sunbird. Juvenile sunbirds look like females, but as they mature, males will get their "bibs".