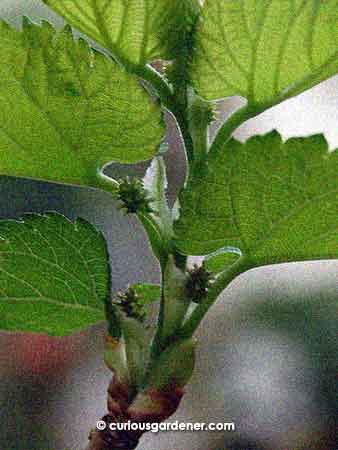 I don't usually spot mulberries when they're this early in development because I don't expect to see them - but I was, this time!

Alright, Novice Gardener, you can’t call yourself a novice any more when you’re giving out sage advice!

Following your suggestion, I snipped off all the leafy stems from two of my - relatively small – potted mulberry plants, and while new leaves started growing within days, it took less than two weeks for fruits to start forming! They’re growing in clusters of threes and fours, and quite indiscriminately along all the branches.

My lesson did not stop there.

I also yanked out the one plant that had taken root through the flower pot and into the garden, which had grown into a sizeable bush. Seeing the mulberry tree in the neighbourhood had spurred me into taking action, because I do NOT want that big a mulberry plant growing here just yet. As gentle as I tried to be, though, I accidentally broke the main tap root when I pulled the plant up. 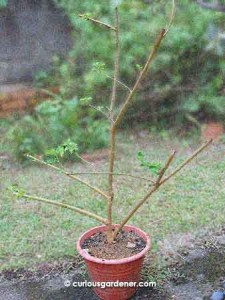 The re-situated, drastically pruned plant, aka Mr Botak, a couple of days after being replanted. It's difficult to imagine that it went from this to a madly-fruiting plant within days!

Since the bush was quite big, with several long stems that reminded me of the Whomping Willow from Harry Potter, I pruned the branches quite drastically. As an afterthought, I decided to propagate those pruned branches.

What can I say, I really hate to throw good plants away!

The main part of the plant was stripped of all remaining leaves to give it a chance to focus its strength on growing roots instead of trying to support several leaves without a proper root system, and it was planted in a bigger pot. It looked very sad – bare branches outstretched like an old abandoned Christmas tree – and I unconsciously named it Mr Botak (bald). Well, it lived up to that name for less than a week before new leaves started sprouting everywhere. By the time the fourth set of leaves opened up on the new leaf stalks, there were little fruits starting to form, too, on most of the new stalks. A rough count gave a total of over 50 potential fruits! 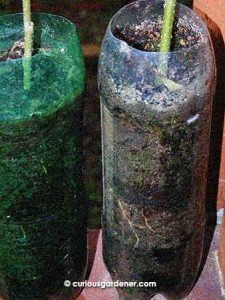 See the thick roots growing? This was within a week of sticking the cuttings in.

The cuttings also surprised me, but not by the way of fruiting. As they were from rather matured, long stems, I cut them into lengths of about 40cm each. I got seven cuttings in total. The fattest ones were stuck into recycled PET bottles while the thinner ones were stuck in tall flower pots. There was no particular reason for this; just the availability of ready planting locations – they had formerly been in use but were now vacant. Again, within a week, the fat stems started budding with new leaves. That’s not surprising. What was intriguing was that the new roots were visible through the plastic bottles, and boy, were they thick, strong roots! Why was I even worried about their not surviving?

I can just imagine that if these cuttings already have such good roots, Mr Botak, with part of a thick tap root intact, must already have a good root system in the bigger, better home!

And before you say it, Novice Gardener, no, I did not do anything to beef up the soil the plants are currently growing in. It’s kind of annoying that mulberry plants only produce more leaves when you fertilize them, so not only did I not add any fertilizer to the soil in that pot, it’s also old, recycled soil. Can we say that mulberry plants thrive on tough love? 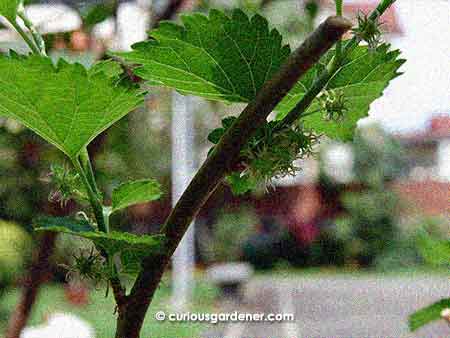 Just a couple of the clusters of fruits growing on Mr Not-so Botak Anymore...

So, I see the light now. Massively prune mulberry plants and don’t fertilize them if you want them to bear fruits. Finally, my dream of having a bowl filled with chilled mulberries on a hot day looks like it’s going to be possible after all! 8)