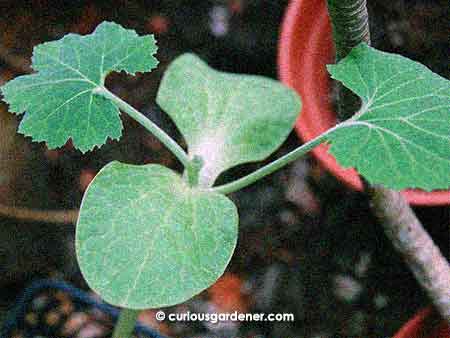 The Weeds have struck again, introducing yet another new plant to me. Prior to a conversation with Mother Weed several weeks ago, I had never heard of the shark fin melon. The name alone gave me a mental image of a triangular, pointy-shaped melon, but no, it’s a normal rounded kind of melon – pleasantly colored and marked, too. How it earned its name is from the way the flesh shreds when cooked, into soft, chewy strands reminiscent of shark fin soup served in Chinese restaurants.

Well, thanks to The Weeds, I now have both seeds and a very strong looking shark fin melon seedling, and I think this plant is going to feature quite a bit on our respective blogs for a while because it’s new to us!

Online hunting, of course, yielded much information on this melon – like its Latin name, cucurbita ficifolia, which means “fig leaf”. As the name suggests, the leaves apparently resemble fig leaves, so it’s commonly known as the fig-leaf gourd. Well, I guess since we’re in Asia, we swing along with the more Asian designation of the shark fin melon.

I was quite happy to read that although this plant is an annual in temperate climates, it can be a perennial in tropical regions! Like the sweet potato plant, it can take root along the stem at leaf joints, which I guess, helps with its longevity. I foresee that we are going to have to designate a nice section of real estate for this plant to spread out, as the vine can grow up to 15 metres long! 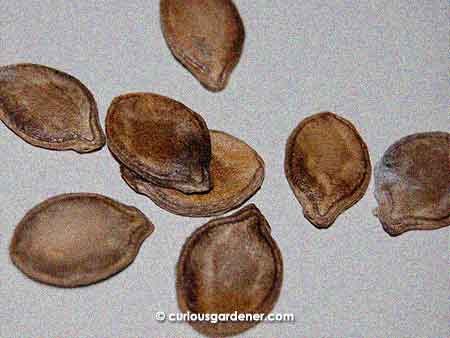 It was also eye-opening to learn that it’s not just the melon that is edible on this plant. The flowers, leaves, shoots and seeds are also eaten – the first three as greens, and the last in the Mexican version of peanut brittle*. The fruit is also versatile. When immature, it needs to be cooked. We’ve tested it in pork rib soup, and it was delicious! When mature, the fruit is apparently sweet, and is used in several countries as an ingredient in confectionary. (Mother Weed, take note!

In contrast, scientists have found that shark fin melon extract has a hypoglycemic effect on Type 2 diabetes. I find it ironic that the same plant that provides sweetness also combats the disease associated with sweetness…

Well, I look forward to seeing all these things (except the last – I don’t think we’d wait that long to eat the melon) with my own eyes, and soon. Wouldn’t it be lovely if the vine could really grow as a perennial here? Until I get a nice, lush vine growing here, I’ll be visiting Weed’s blog to follow the progress of their shark fin vines…