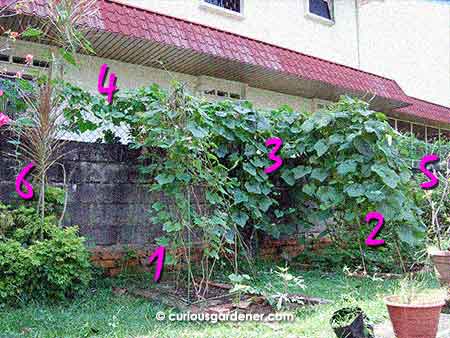 I just don’t get it. When you plant vining plants on their very own, isolated trellises, they don’t grow extremely vigorously; but when you plant them in closer proximity, they suddenly decide they want to go places and have a growth explosion.

Yes, “explosion” is the best term to use here.

Based on two previous plantings, I gave my angled loofah a slightly bigger A-frame trellis to grow on, and expected that to be sufficient for it. Also based on the way the plant grew the first two times, I decided to make use of the space below the trellis to plant a row of okra plants along the edge, and jicama plants in the middle. I expected the loofah plant to have a certain life span, beyond which, the jicama plants would then take over the trellis. 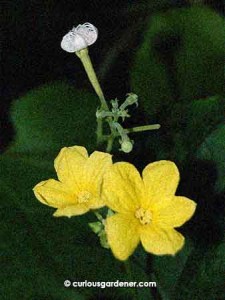 White snake gourd flowers with yellow angled loofah flowers. Thank goodness the former blooms earlier in the day while the latter blooms in the evenings, so there are no cross-pollination concerns!

Almost two metres away, I set up a second trellis for the snake gourd plant, which I expected to grow similarly to the angled loofah.

There’s a problem when you have expectations – things don’t always go the way you think they will.

The angled loofah started growing as before. The snake gourd plant, on the other hand, went berserk. It climbed to the top of its trellis, then latched onto the fence that I had foolishly built the trellises too close to. It then spread sideways along the fence, discovered the angled loofah’s trellis, and decided to try to take it over. In the meantime, it also kept spreading in both directions along the fence, and into my neighbor’s garden.

My neighbor initially politely redirected the vines to our side of the fence, but once the fruits started growing, and given permission to harvest them, stopped the practice.

And boy, did the vines fruit! As I’ve mentioned earlier, we had to give the first wave of them away. The vine then had a short period of rest, and has started fruiting once again. It’s been quite a nice feeling just to go up to the plant, pluck what we want, and cook it immediately. That was my vision when I started growing edibles. 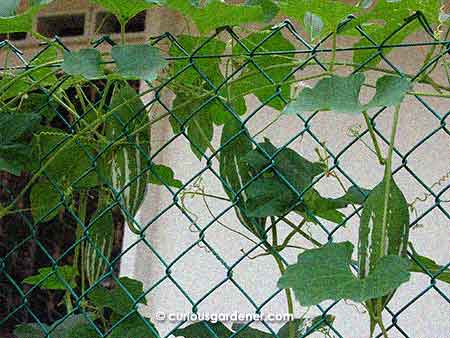 This is what we see all along the fence - loads of snake gourds dangling from the vines! I have to say it's easier to spot them here than on the A-frame trellis where you have to keep looking under leaves for hidden fruits.

But, back to my unruly vines.

The angled loofah decided to fight back when the snake gourd vine established itself on the loofah’s trellis. It, too, has now started growing more vigorously, and is making its way along the fence.

Besides that, the jicama plants have also started climbing upwards sooner than anticipated – first, up the okra plants, and now they are mingled firmly with the loofah and snake gourd vines. Talk about weaving a tangled web! 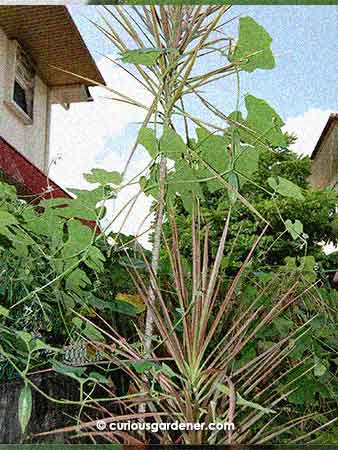 The snake gourd vine has managed to reach over from the fence to the Rainbow Dracaena plant that it climbed to the top of, and is now dangling down from. There are already fruits growing on that bit of the vine!

And that’s not the end of the story, yet.

All the vines are so heavy that my trellises have both gone wonky and are now leaning against the side wall. I suppose I should be grateful that they didn’t lean the other way where they would have simply collapsed, but I can see that I’m going to have to move my DIY efforts up a notch and start using more heavy duty trellis materials.

The abundance of leaves has attracted caterpillars, as usual. However, since there are leaves to spare, I’ve allowed the caterpillars – mostly hairy caterpillars – to do nature’s version of pruning. After all, too many leaves could lead to plant diseases like powdery mildew (hope I didn’t just jinx the plants by saying that!) and so on. The Oriental garden lizards have also been seen climbing around the trellised plants, so there are probably insects and other food sources for them in there.

So now when I look at my current vining plants, I see a learning experience, as well as loads of fruits everywhere. With vines, you simply have to let them grow and spread to be prolific.