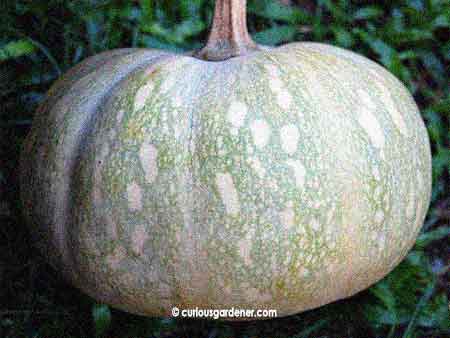 Pumpkin harvested from Novice Gardener's realm. I put it near my plants so they would aspire to grow fruits like it!

Pumpkins were not on my immediate list of edible plants to grow when I started planning my veggie garden. In fact, there were several other plants that had never crossed my mind to grow, but I ended up growing simply because I was curious to know whether I could encourage them to start and keep on growing.

Well, the enthusiasm and success of Novice Gardener were very contagious, and when offered seeds last year, I gamely accepted and sowed them.

The first attempt with the Jack of All Trades pumpkins was a flop, but I was encouraged by my veggie gardening buddies to try again. The fact that they had pumpkin plants growing in their gardens was foremost in my mind, and maybe my positive mental state gave the seeds the jolt they needed to germinate.

The generic pumpkin plants had a good start – they were all sown at the same time – and got their own home in a recycled styrofoam box filched from the back of the supermarket. I first gave them short bamboo sticks to cling on to, but realized that letting them grow upwards had several hazards. I had an idea to give them horizontal platforms to grow on, but eventually decided to simply let them grow as they will and see where that led us. The stems have since drooped downwards, but are still growing and branching out. 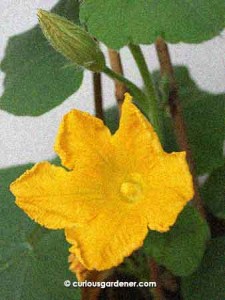 I finally caught the male pumpkin (generic) flower in bloom!

The butternut pumpkin plants have also been growing steadily. They haven’t been transplanted yet, though, and are still in medium growing bags. One of the plants protested the space constraint and took root in the pot I had left it on top of, so transplanting it will involve moving not one but two pots. I’m still trying to figure out the logistics for that…

We’re also finally at the flowering stage. The buds had been tantalizing me for a while, especially the generic plants, where there were clusters of them! Then came the day when I discovered the first flower. I couldn’t figure if it was opening or closing, and this carried on for a few days until I found out from Mother Weed that the flowers bloom in the morning. Unlike roselle flowers that open from about 8 o’clock to noon, pumpkin flowers bloom early, and for a very short window. Through trial and error, I’ve discovered that this is around 6am to just after 10am.

Right now, the boy flowers are dominating the roost. I’m again doing my best to ignore the plants so that they get on with what they need to start making girl flowers. Since others have already been successful in growing and harvesting pumpkins here, I am trying to skip my usual Doubting Thomas phase and simply will our plants to be fruitful.