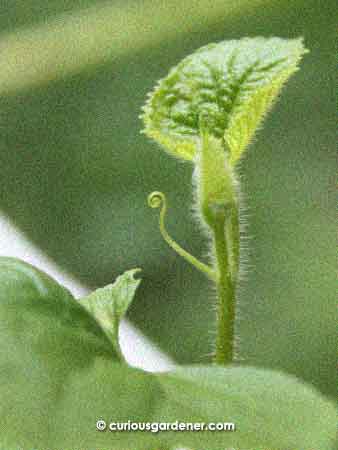 The first tendril on the Hami melon plant before the disaster.

Nothing ever seems to go smoothly, for some reason. I was so excited that we had one Hami melon sprout from the seeds given by Novice Gardener. It had been growing slowly but surely, with the first few leaves and the first tendril, when disaster struck – the wind must have blown the stem about, and the stem snapped! It was hanging on by just a tiny strip, so I set it straight, hilled up the soil around it, and added a support in a frantic attempt to secure it.

One day later, the wind struck again, and the stem was hanging at a bad angle with the inner part of the stem exposed again. In desperation, I severed the stem two leaves above the break, re-hilled up the soil and placed the support even closer to the stem, with the thought that there would be less of the plant to be tossed around by the wind and that with less plant to focus on growing, it would be able to start healing.

The top of the stem that I broke off was treated like a plant cutting and placed in a smaller flower pot. I consoled myself with the thought that if the main part of the plant didn’t survive, maybe – just maybe – the cutting would survive and we would still have a Hami melon plant. 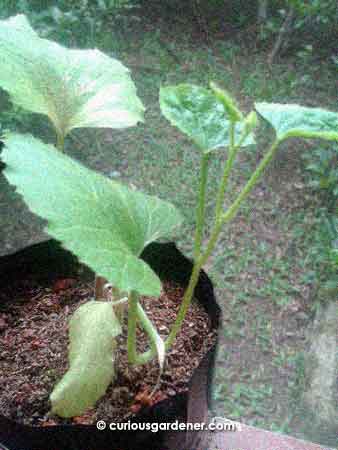 This is what the main part of the plant looks like now. See the bottom where I broke off the stem, and where the new stem is growing?

All this, mind you, happened in the last couple of weeks when the weather was hot and dry, so I wasn’t very optimistic about the Hami’s survival prospects.

Well, more than a week later, both the main plant and cutting are still alive. The main plant has started growing a new stem with a few sets of leaves, and a new tendril! It’s my hope that like other vining plants, it will grow more roots where the stem touches soil, so I intend to re-pot it in a bigger pot (I daren’t put it out in the garden where my plant foes, the dogs and gardeners, will likely damage it) where I can place it deeper and raise the level of soil around the stem even more.

The cutting has been quite dormant in comparison, probably putting energy into growing new roots. I can’t see them yet, though, but since the stem and leaves still look normal, I guess they are indeed developing in there.