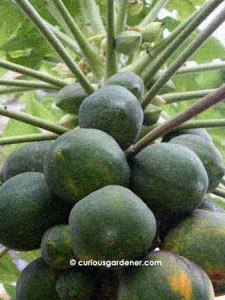 The day prior to this photo and the spraying of suds, these papayas were about 40% covered with mealybugs.

You know that song from the movie, South Pacific – I’m gonna wash that man right out of my hair? I sure wish I could do that with the pests on my plants!

In fact, I sort of did that, after doing some research into getting rid of stink bugs and getting the suggestion from a recent visitor.

Patrick recommended using a little dishwashing detergent with water in a water spray bottle, which he had found effective against mealybugs on papaya trees.

I also found a video on YouTube showing how a solution of water and detergent seemed to kill, or at least immobilize, stink bugs really quickly. (It’s a little roundabout – skip to 4:00 or so for the actual spraying of the bugs) Since I had these pests on my long bean plants, I decided to test this theory. 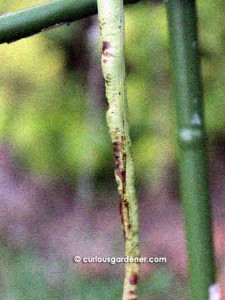 The day after being sprayed by suds, the long beans didn't have any more stink bugs, but they were spotted and streaked by the solution.

Now, I can’t remember where exactly I got the proportions from because I read and watched quite a number of articles and videos, but I ended up making a solution of about equal parts detergent and water. After mixing it up, I headed for the long bean plants and sprayed the few stink bugs I could see. (Of course they went into hiding once I had something I could use against them!)

When you spray a soapy solution from a spray bottle, it tends to froth up, which is great. The soapy bubbles coated the stink bugs, and they stopped moving almost immediately.

I was so thrilled that I immediately started using the solution on other pests on other plants – small hairy caterpillars and lots of small ants spreading aphids on the angled loofah vine, and mealybugs on the fruits and leaves of the papaya tree… It was great! I imagined the soapy froth suffocating them as I sprayed them liberally.

And then the following day, I found that the leaves of the plants that I had sprayed had started turning brown and were curling up. Whoops, I think I overdid it with the strength of the solution! 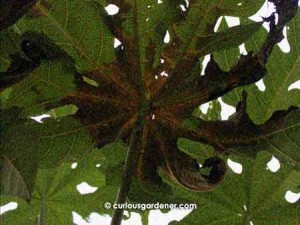 The papaya leaf started drying up where the soap suds had been sprayed. Maybe I should have rinsed off the leaves after a couple of hours.

It’s also likely that I should have waited for even later in the day, when there was less sunlight on the plants. Other plants nearby that had been splattered by the soapy spray also had lots of little brown spots on them, so even though this soapy method appears to have rid our plants of stink bugs and most of the mealybugs (ants and caterpillars were still around the next day), the effect on the plant leaves was a definite drawback.

I’ll try this again with a less concentrated soap solution and observe the effects.