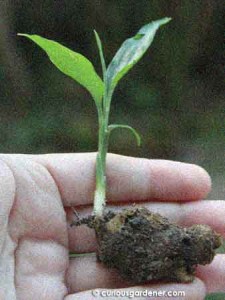 Small ginger rhizome that was rescued and transplanted.

More than two years ago, I planted a stretch of culinary ginger plants that I had expected to grow and thrive. Little did I realize that my expectations would be dashed. For some reason, our dogs began to run through that area, and they trampled my little ginger sprouts so much that the plants had to struggle to stay alive, even though I had ringed them with stones.

I consider ginger a long-term plant that you plant and leave to its own devices for months. Following permaculture principles, such plants should be planted in a “far away zone”, so they had been planted in the back of the garden, where I don’t visit often. No thanks to this, I didn’t realize that the dogs had knocked the stones awry, and with my usual signal to the gardeners to Stay Away gone, the baby plants were mowed down.

Long story short, I thought the plants had all died out, but had a pleasant surprise recently when I realized that some of them were still alive. What I thought were blades of green grass were actually the leaves of little ginger sprouts! (The way to be sure is to slightly crush the leaves to get the scent of ginger.) 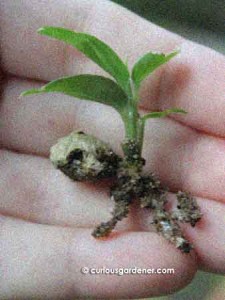 Although this looks rather like a spider with a plant growing out of it, it's just the smallest ginger rhizome I managed to rescue.

A careful search along that stretch allowed me to recover six baby ginger plants. All of them had a bit of rhizome attached, from small to almost-there. Yes, they were really small! One plant even fell off the tiny bit of rhizome when I picked it up.

I transplanted all of them – two to pots where I could monitor them, and the rest in my old compost pit which is shaded by the mango tree. They all seem stable now, and I’m so grateful that plants are always so forgiving and hardy in that they will keep trying to adapt and grow despite the growing conditions surrounding them.

This is not to say that ginger is a hardy plant like the jicama is; I’ve had some ginger plants that had rotted at the roots, leaving empty rhizomes behind. That probably happened to the other baby ginger plants that died off. However, I’m happy to have these survivors. Here’s wishing them luck in growing to adulthood!