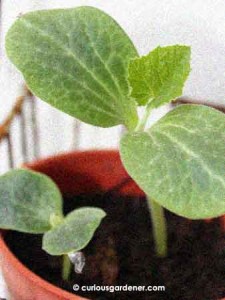 The pair of butternut pumpkin sprouts, with the oldest plant sporting the first true leaf.

I usually don’t like to sow single seeds at a time, and in the case of the pumpkin, I had my doubts about the seeds germinating at all.

Well, I had no success with the Jack of All Trades pumpkin seeds that I got from Novice Gardener last year – seeds that grew well for her. After my attempts, I became convinced that pumpkin plants just didn’t like the microclimate here.

So, it was with a mental roll of the dice that I sowed a pair of seeds each of the Butternut pumpkin from Novice G and the generic (I think) pumpkin from The Weed just over a week ago. Getting one plant out of the four would have delighted me.

Well, the first to pop up was one of the Butternuts, and I was thrilled! But, I think I’m in the mood for new plants, and the seeds sensed it, because one of Weed’s pumpkin plants decided to show up and say hi next. 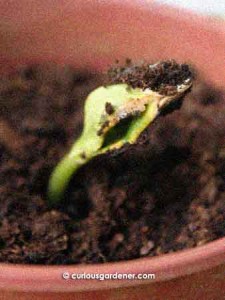 One of the pumpkin sprouts made me chuckle as the seed case didn't drop off immediately and trapped the seed leaves. I do like the way the seed burst out from the earth so dramatically!

I was over the moon! As long as I can keep the plants alive, we could possibly have two different types of pumpkins growing in our garden!

It didn’t end there, though, because the other two seeds didn’t want to be left out, and they’ve both come out to play as well!

So right now, I’m the proud mama of four little pumpkin plants, and I am going to have to consider very carefully where I let them grow, because my four-legged companions (dogs, in case you were puzzled) are as curious about things as I am, and tend to go tromping through all our plants, regardless of whether there’s a barrier around the plants or not.

Can you just picture the demise of future, precious pumpkin flowers?

The great thing, though, is that the plants are growing – and they are going to be transplanted into bigger pots before they get pot-bound so that they get every possible advantage I can give them.

So thank you to Novice G and Weed for the seeds; I’m now following in your wakes…