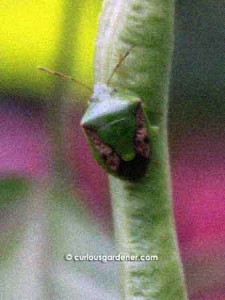 I recently noticed a new insect hanging around our long bean plants – or, rather, on the long beans themselves. Kind of diamond-shaped and green matching the beans, it was noticeable because it had a bit of light brown edging along both sides. I initially gave it a wide berth because it looked to me like the green stink bug that emits a yucky smell when disturbed.

Well it turns out that it was indeed the stink bug, so it’s lucky that I didn’t provoke it and experience the stink. Bleah…

Left alone, the bug apparently invited some friends to join it, and they decided that the long bean plants – that are sharing the trellis with my snake gourd vine – would be a great place to set up home.

I was wondering why the beans started looking rather odd – very bumpy and dehydrated. Some of the beans were also eaten away right near the tops, making me wonder if the birds had started eating them. 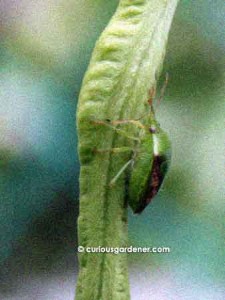 Profile view of the stink bug. Know thy enemy...

No, apparently it’s the stink bugs that are responsible for the damage. I’ve since learned that they are sap-sucking pests that have needle-like mouthparts akin to mosquitoes, and to add insult to injury, the adult bugs have a taste for developing seeds, i.e. the developing long beans.

Well that explains the sick-looking long beans, and the young beans that have dropped off.

The bugs have apparently procreated on the long bean plants, because I’ve seen a number of miniature stink bugs – the smallest ones, black, and the medium ones, brownish – running along the beans. Since we haven’t been able to harvest a single healthy bean in over a week, and have had to discard a number of weird-looking beans, I’m about ready to get out the insecticide and start spraying…

Does anyone have suggestions that are organic in practice? Long beans are one of the veggies that grow well here, and we love eating them. I’ll be darned if the stink bugs take that away from us! 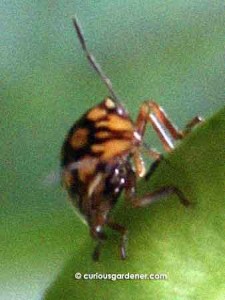 This may look like a cockroach, but it's the stink bug in one of the instar stages. Know thy enemy... 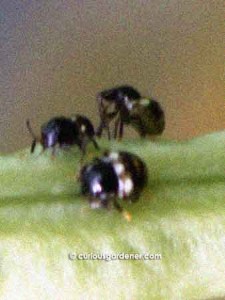 I initially thought these were lace bugs because of their bumpy bodies. However, closer inspection showed them to be in the shape of... the stink bug. Look closely and you'll see the topmost bug busily sucking sap from the long bean. Know thy enemies! 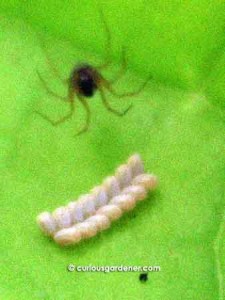 In our final step of going backwards in the life cycle of the dastardly stink bug, here are what I believe are their eggs. They're described as being "barrel-like". It's my most fervent hope that the spider in the picture is waiting for the eggs to hatch so it can feast on the little stink bugs!