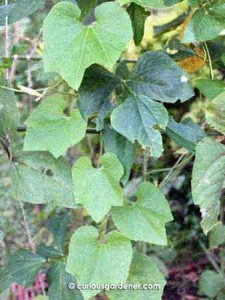 Easily identified, the snake gourd leaves are the lighter ones while the long bean plants have darker green leaves.

My poor green snake gourd vines had a shaky start when I failed to transplant the pair of them fast enough, each becoming root-bound in its first small 6cm flower pot and producing single flowers while still very small. I hastily shifted them to bigger pots because I still didn’t have a trellis ready yet. The plants did what they do naturally, and simply latched onto any and everything around, climbing up to my hanging potted plants! Again, I was concerned when I had to detach and disentangle them when I finally brought them to the completed trellis. The trauma was enough to kill one plant, and, expecting the other to die off as well, I sowed my long bean seeds at the same trellis.

The long bean plants grew and prospered, and the poor snake gourd plant sat there, probably reorienting itself to the new surroundings. The initial stems looked weak and started dying off, but in true plant tenacious fashion, once settled in, the vine grew new stems that were stronger than ever, and began to compete with the long bean plants!

Uh oh, I thought, this plant could be trouble… 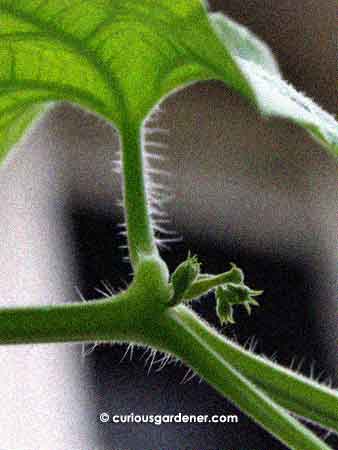 Lots going on at this juncture - a cluster of male flower buds next to an upthrust female flower bud, and probably the beginning of a new stem growing out.

With a fresh and strong green stem, the vine climbed to the top of the trellis, wound itself through the long bean plants, then began to reach for more space to grow. I put in a string linking that trellis to the other one about 1.5 metres away, and trained it onto the string. The tendrils tend to branch out sideways to anchor the plant, and it fought me as I tried to keep it on the straight and narrow. However, I persevered.

When the vine was halfway across the string, I noticed flower buds beginning to form at each leaf node along that stretch. One node had a cluster of male flower buds while the next one had a male cluster and a single female bud, and kept alternating that way!

I tried to trace the vine backwards through the cluster of long bean vines at the peak of the trellis – not too difficult to do as the snake gourd vine is lighter green and hairy in comparison. What I found was a more developed cluster of flower buds, where the male flowers were on an extended stalk! 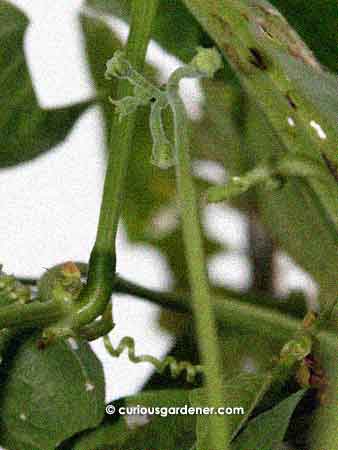 Just like other cucurbitaceae plants, male flower buds grow in a cluster and take turns to bloom. So, even though you see the group of buds, only one will open at a time. It looked like we would see a number of male flowers begin to bloom as several of them on the older part of the vine began to prepare themselves as the flower stalks grew longer and the buds began to swell.

After a few days, however, I noticed that something different was happening at one of the newer clusters of male and female flowers. Instead of the male flowers developing and growing out on the longer stem, the female bud began to grow while the male buds remained stagnant. So the anticipation is now rising to see the blooming of the first female green snake gourd flower.

I’m also expecting this vine to grow rather vigorously, based on how it’s already developing. The trellis will probably not be able to contain the vine, and I wonder if the neighbors will get freaked out by the gourds if I let the vine grow onto our fence – I’ve seen pictures of snake gourds, and they really do look like snakes!