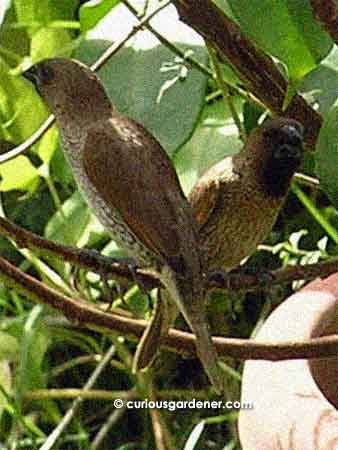 A pair of scaly-breasted munias resting on a sunny afternoon. I think the one in the foreground might be a juvenile.

At a quick glance, you’d easily mistake the Scaly-breasted Munia for a sparrow. Both birds have similar looking brown bodies, but the munia isa little bigger and slightly more elongated than a sparrow. It also has a rather large, conical black beak, which is what caught my attention when I was sorting photos I had taken.

Yes, I have a habit of snapping photos in the garden, grabbing photo opportunities that present themselves, and analyzing them later at leisure. When I saw the brown birds, I thought they were sparrows, and because sparrows had been scarce for a while, I took their picture. Imagine my surprise when I realized they were something new! To me, anyway.

Once I had identified the birds’ identity, I pulled out older photos and found that I had incorrectly categorized some munia photos as those of sparrows. So since I’ve been prowling with the camera for about several years now, I’ve discovered that these birds have been coming here for over 2 years. 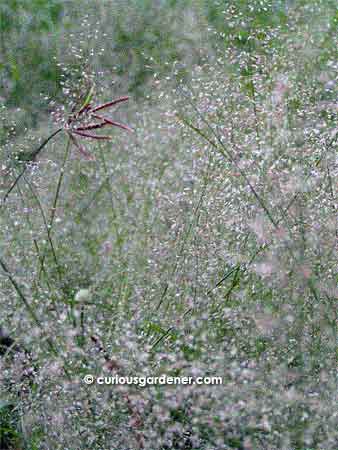 Squint closely and you should be able to make out at least 3 types of grass seeds - the "cloudy" ones, the "bunny tail" and the long magenta ones - seed-eating birds' paradise!

One thing I like about these birds are the interesting patterns on their bodies. They live up to their name of looking like their chests are covered in scales. Another distinguishing feature (opposed to sparrows) are the dark patches around their beaks, covering part of the face and down to the top of the chest. Together with their broad, conical beaks, they for some odd reason remind me of clowns!

Another thing about these birds that caught my attention were the sounds they make. The closest descriptions I’ve seen online are tut-few and sieuw. It’s a very sing-song kind of call that I rarely hear, and a pleasant one at that.

These birds feed on grass seeds – which explains why they’re in our garden. There’s lots of grass, and several different types of grasses, too – all of them self-seeded and intermingled. That will probably be another post, for another time. However, suffice to say, there’s plenty of variety for the birds to choose from.

Read more about these birds from our local experts.