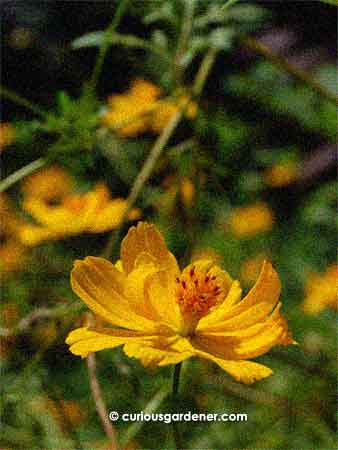 The yellow cosmos plants have far exceeded my expectations. They've been planted (and have self-seeded) all over the garden to provide cheery lots of yellow flowers. What I did not expect was for some of the plants to grow over 1.5metres high. Brilliant!

Here we are, at the start of a brand new year. In terms of gardening, I find myself a little older and wiser, because compared to a year ago, the garden looks more alive.

Yes, I learned that a gardener has to keep planting anew every so often, or else face periods where the plants have died out and there’s nothing nice to feast the eyes on – which is what happened a year ago.

Of course, there are more things that could have been done, but considering we can’t have our druthers and spend all the time in the garden, I think I’ve done alright this time.

There are still trellises to be set up. That seems to be my constant complaint, but I’m being more particular about where I set them up now. Unfortunately, the spot I currently have my eye on is a sunny stretch occupied by a tangle of several plants I’d planted many years ago when I was into ornamental plants only. 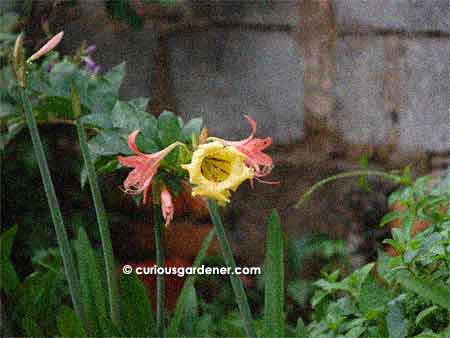 This was just the beginning - when the Chalice Vine began to stretch out and start leaning over the lovely row of hippeastrum lilies. In the bottom right corner is the then-meek purple allamanda plant that has now spread so much that I'm not thrilled with it any more. 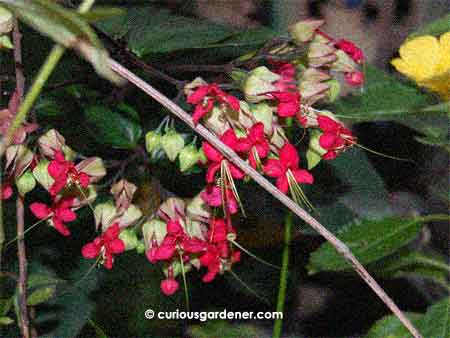 I love these pretty red clusters of flowers of the red Bleeding Heart plant. It was such a relief to learn that it wasn't choked to death by all the other plants that grew over it, some of which you can see in this picture.

Sound messy? It is. But I’ve been working slowly at it and have managed to reveal the sources of the two Bleeding Heart vines – both precious to us because they were passalong plants from my aunt, who has since moved from that home. And both even more invaluable because they were not easy to introduce to the garden, and chose to grow only in the two spots they’re each currently in. So we’re glad to have them, still, after all these years. Knowing how things go, they will probably grow strongly after this and spread everywhere, and I’ll end up cursing at them one or two years along on this blog… 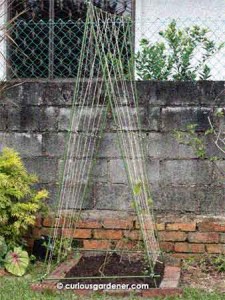 The latest A-frame trellis. This time I've made a growing bed enriched with my organic compost, and hope weeds and grass don't invade the boundaries anytime soon!

Besides the Bleeding Heart plants, I also unearthed a few pots and garden ornaments that had been hidden under all that foliage. They were a surprise. But that’s what happens when you try to tame your garden, then leave it to its own devices for a time. I guess my philosophy towards gardening has evolved since my “ornamental plant days”, and I’ll work out something different this time – hopefully in tandem with Mother Nature.

In the meantime, I’ve already set up one trellis in the cleared space. It’s housing the young snake gourd vines that were pot-bound, and has fresh long bean plants that have just sprouted at the base. I’m pressed for vertical space, so I bent my usual rule about not mixing plants on the trellis. We’ll see what happens there. Anyway there’s more clearing to be done, and at least two more trellises to be put up along that stretch.