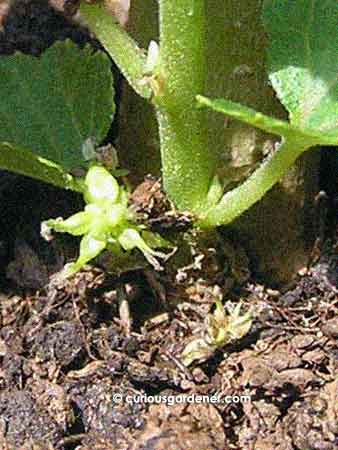 The first mulberry flowers that I saw earlier in the year. Sadly, they aborted in the hot, dry weather we had then.

It appears to be odd-fruit week at The Curious Gardener…

In the more than one year that we’ve been growing mulberry plants, only I have had the opportunity to taste the fruit. It’s not that I’m a selfish person – the thing is I found only one fruit on the plant, and it was smaller than the tip of my index finger!

Since then, that plant ended up rooting itself in the ground, and I didn’t have the heart to shock it by uprooting it. Another few pots of cuttings grew slowly and didn’t bear fruits, although one flowered but aborted in the hot weather we had in the middle of the year.

So now that I’ve been taking stock of our plants, I realized that I’ve been neglecting the mulberry plants, and it was time to get them producing for us. According to the infamous post at the GCS forum that tempted many gardeners to start growing mulberries, pruning induces flowering. 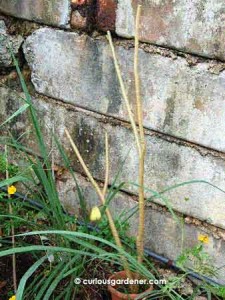 The mulberry plant after I was done pruning it - completely bald of leaves.

So, I hardened my heart and brought the shears to the biggest mulberry plant rooted in the ground, as well as one of my two matured potted plants, and cut off every part of the plants that had leaves.

Yes, I had to be typically Singaporean kiasu and leave just one of my plants untouched in case the pruning was a fatal experience.

If you consider plant psychology, massive pruning probably shocks the plants into hurriedly growing new leaves and producing fruits from which to reproduce themselves. The leaves are, of course, necessary for photosynthesis and food production of the plants. The fruits are an added bonus.

The good news is, it really works!

I pruned the plants just over a week ago and while new leaves started sprouting within a few days, just today I found these: 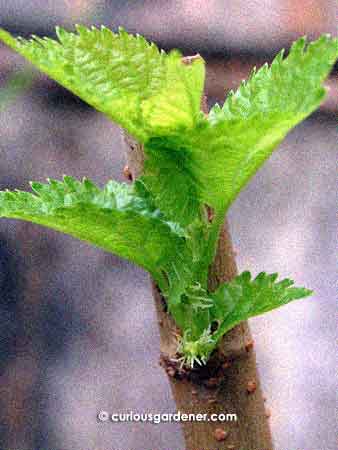 Do you see them? Right at the base of the new leaf stems are at least 2 developing fruits!

Imagine that! Developing fruits within less than a fortnight of pruning…

And they’re so alien-like in appearance – squiggly white tendril-like hairs reminiscent of our local rambutan growing out of each pip-like part of the fruits.

I don’t have great expectations that they will be any bigger than the first fruit, but as long as they grow prolifically to make up the quantity, I won’t complain!

I’m also happy to have proved to myself, at least, that pruning the mulberry plants really does induce flowering. I am a believer now! 8)