I thought the Kiwano plant had started growing fruits, but it appears I was mistaken. As usual, the plant appears to have found it necessary to practice growing fruits that it aborted along the way. To me, that’s the equivalent of plant Braxton Hicks…

The first fruit that I was excitedly following disappeared from view until I realized it had died off. 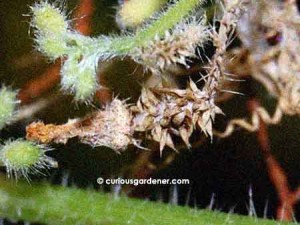 It's kind of interesting to see that when the growing Kiwano fruit aborted, it became a spiky brown mass. Prickly in life and prickly in death!

The second fruit seemed to be growing, then kind of stopped and is at a standstill. Since the stem is starting to yellow, I assume it is dying off.

Now I have my hopes pinned on another growing fruit that appeared from nowhere, it seems. The plant is so bushy that I have trouble spotting fruits and flower buds until they somehow manage to catch my attention. So this is the current contender we have our collective eye on… 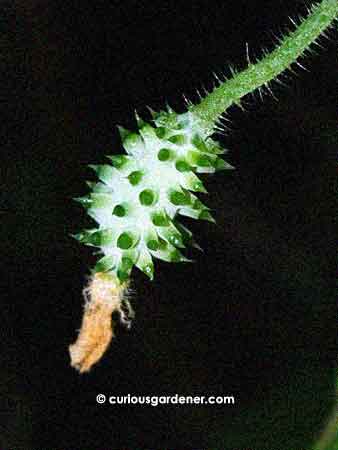 Here's the latest growing fruit. See how the spikes are starting to space out? When the fruit is ripe, they'll be even further apart.

This one appears slightly larger than the previous developing fruits, and the spikes are starting to spread out. Will it reach the finishing line (read: harvest)? Stay tuned!