My angled loofah plants have been in female-flowering phase again, and I’ve been happy to note several successful pollinations. Normally, once the female flower is pollinated, you can almost see the fruit grow before your eyes – they grow that fast. I like following their progress at this stage, so I usually visit the loofah trellis more than once a day if possible.

So just imagine going from a happy sight like this: 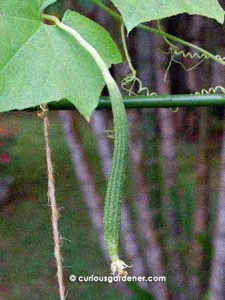 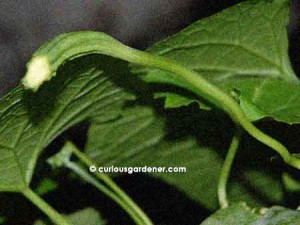 Eaten even before it could approach its prime... :(

…in the space of a few hours. (Not the same fruit in the pictures – how was I to know I’d need before and after pictures of that fruit?) At least three-quarters of the baby loofah was broken off and missing! 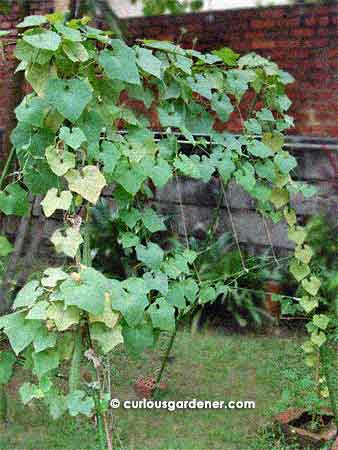 The state of the loofah trellis today - the two vines have matured and spread well. Even the newer leaves are bigger than ever.

So what do I blame this time? The most likely culprit would be a bird, since the fruit was at the top of the trellis. The top bar of the trellis would have provided a secure perch for the bird to have leaned over and nipped off most of the almost 10cm long fruit.

The two ketola vines growing on that trellis are maturing and spreading quite rapidly, and it’s rather leafy right now. My assumption is that the predator saw something interesting poking out from the foliage and took a snip of it. Since I didn’t find the rest of the fruit on the ground, the predator must have been omnivorous or herbivorous, and ate it up.

Whatever it was, I was upset to have been robbed of one of my “babies”. To play it safe, I pulled leaves over the other little ones to conceal them. It seems to have worked as there are now 4 other fruits that are about half grown, with at least one more that’s a couple of days old. If you squint closely enough at the trellis picture above, you may be able to make out a couple of fruits in the bottom left quadrant. We should be able to harvest the biggest ones by the end of this week. 8)