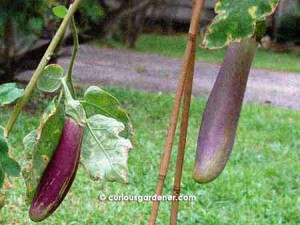 Short purple eggplant fruits - on the left, optimum stage for eating; on the right, the size I wish the fruits would be for eating...

October has been the most fruitful – literally – month for us to date.

We’ve been harvesting Red Lady papayas – they’re not that big yet but are sweet enough to have converted non-papaya eaters to fans of these papayas!

The purple brinjal plants have been quite prolific, too. When I read on the seed packet that they were the short variety, I had an image in my head that they would be short in relation to the long aubergines. So when the very first fruit was developing, I left it on the plant to reach what I thought to be a respectable length of almost 20cm. However, it lost its sheen and the nice deep purple colour, and a family friend pointed to a younger fruit that was about half the size and said that was the best time to harvest the fruits. I checked, and it had the appropriate spongy feel, so sadly had to agree. So, the fruits we’ve had have been around 13cm long, but of a beautiful deep purple colour with satiny skin.

We started harvesting more okra – this time from the long green okra plants grown from seeds from Novice Gardener. On my other plants, fruits of the same length would have been considered old. These, however, grew to about 18cm long and were still nice and tender. I shall have to remember to save seeds when the plants get older. Hope they’re not hybrids!

Angled loofahs also made it to the dining table a few times. I was intrigued how the plants saved their energy by producing a few female flowers at a time, then holding off on the female flowers until the fruits had grown and been harvested and the plants had rested for about a week. This cycle has happened a couple of times so far, and I’m hoping it happens more frequently so I can keep trying to find the best time to harvest them for eating. 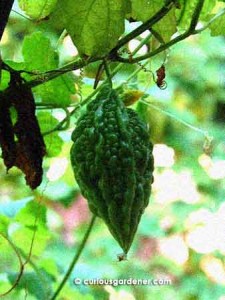 It still thrills me to see the fruits growing on the vine!

Our supply of small bittergourds has diminished as I recently discovered that the contract gardeners had accidentally severed one of the two vines at their last visit. Nevertheless, a single vine can produce enough fruits for at least one meal a week if you harvest and save the fruits in the fridge over a few days.

We had to do the same thing with the long beans – harvesting and stockpiling in the fridge. However, the vines are more prolific now so we get to eat beans 2 or 3 times a week now – and all this from 4 vines. 8)

I’m still trying to figure out the four-angled bean plants. They flower but you don’t see that many beans. Of course, the beans occasionally hide from view, and we ended up with a few giant, old winged beans that we harvested seeds from. I was lucky to spot a few developing beans that we harvested and had a nice side dish of while they were still young and tender. I hope we’ll be able to repeat that again soon.

Last but certainly not least are the cute little cucumbers that appeared just last week. They, unfortunately, just had a setback as the trellis they were growing on was knocked over, stripping all the plants from the chicken wire they had been attached to, and uprooting a couple. I hope they survive the shock and continue to grow.

So all told, this month has been a very fruitful one, and I’ve had the sublime pleasure of passing through the veggie section at the supermarket with my nose in the air at the “less fresh than mine” vegetables. It’s a pity we can’t be completely self-sufficient because we don’t have the climate to grow everything we like to eat, but being less dependent on commercial crops sure feels good! I must plant more progressively to ensure a continued supply of what we can grow (yes, my biggest failing so far…).