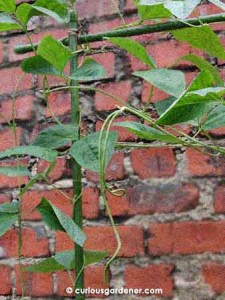 Everyone who knows me knows how thrilled I am to get seeds of new plants. My problem is, I don’t always plant them immediately. So, the long bean seeds that I got way back at the beginning of the year were only planted in July – and because I delayed in making their trellis, were only transplanted when they were 2 weeks old. This isn’t good as bean plants are vigorous growers, so they were slightly stunted by the time they went into their permanent home at the trellis.

It wasn’t until the end of September that flowers made their appearance. As usual, the first few aborted – likely because of the hot, dry weather we had then – but after a couple of weeks, they finally set fruit. 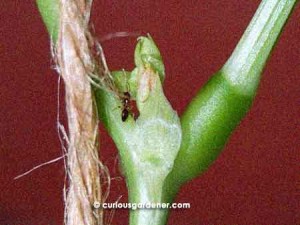 This growth in the stem joints always thrills me because I know the flower buds are on the way! The added confirmation is the presence of ants hanging around.

These long beans are the thinner variety – although if you leave them on the vine long enough, they’ll fatten up like normal long beans! They live up to their name and have been growing to more half a metre long. In fact, the longest one was 63cm!

I have just 4 plants growing at the trellis, and since the beans appear so sporadically now, we end up harvesting one today, another tomorrow and maybe another couple the next day, and in order to have them at a single meal, have to keep the first ones in the fridge until we’ve accumulated enough to cook a single dish. Maybe we won’t have to wait as long once all the vines are producing more prolifically. However, it’s time to consider sowing seeds for the next growth cycle. 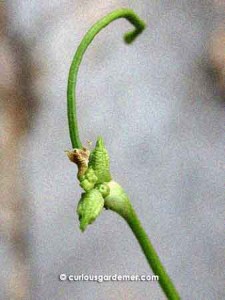 Here you see the first bean in this bunch of buds forming.

I have to mention that I like the trellis that the vines are currently growing on. It’s a 2-metre tall tic-tac-toe grid made from 6 poles, twine and cable ties. That’s 3 horizontal poles attached to 3 vertical poles embedded in the soil. The cable ties and twine join the poles together, and as the vines grew, I added more horizontal and vertical surfaces with twine. I like to be adaptable and do things to suit my plants.

While I initially thought I’d make this a “table”-type of trellis, I decided to forgo the top because I was happy with the way the plants were growing. What happens is, when the vines reach the top, they fall over and keep growing on whichever side they’re on, latching onto the trellis for support. So far, it’s also been quite easy to spot and harvest the beans – a huge plus for me.

Alright, I’m happy I’ve reached one of my objectives to have long beans growing in the garden again. Now I can scoff again at the beans sold in the supermarkets and be happy that mine are sweeter than they are!