By name, kangkong is a water-loving plant – water spinach or Water Convolvulus. Yet, I’ve been growing it in soil with reasonable results. Well, the only thing is, they need to be heavily watered every day, or else the plants start wilting fast. 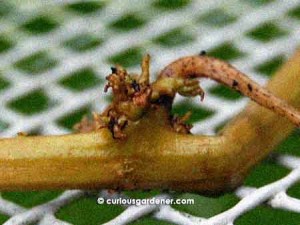 The roots that grew on the long kangkong stem.

It also doesn’t help that I chose to plant them in hanging recycled PET bottles. This means that they dry out faster and they’ve become root bound as well. (Note to self: next time I won’t put in drainage holes in the hanging bottles so they don’t lose water so fast – yes, next time!)

Anyway, I had one plant that had grown a very long stem. I was reluctant to cut it because it bore a lot of flowers, and they were just too pretty to not let bloom. The stem has since cut back on growth – probably because I don’t water the plant as much as it needs – and the stem became bare of leaves while roots tried to grow at the leaf nodes as the plant fought to propagate itself before it died completely.

This is one of the amazing things I love about plants – seeing the ways they strive to survive and reproduce themselves. 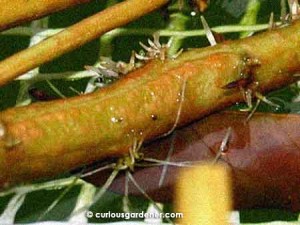 The network of roots that grew after 2 days in the water.

Finally faced with the ugly, long bare stem, I decided to cut it off. However, seeing the roots at the leaf nodes gave me an idea…

We have an outdoor fish tank that is covered with some plastic netting to keep the fish from jumping out and prevent birds from stealing the fish. Part of that netting began to droop, and when the water level is high, it is partly submerged. I decided to see if the water spinach would show me just how much it liked growing in water, and cut the very long stem into several pieces, placing them on top of the netting so that some of the root nodes were touching the water, and one test specimen directly on the water, under the netting, because I’d heard that the hollow stems help them to float. They do! 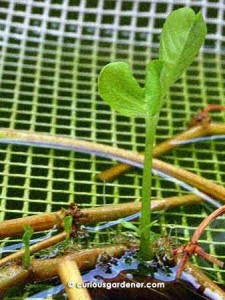 Little green shoots of water spinach by Day 4. Also notice how the roots are also sprouting like crazy along the stems.

Within 2 days, the stems on the netting started growing lots of new, white roots that reached eagerly towards the water. Just as eagerly, the fish were below the netting, trying to nibble at them! However, the stems were protected, and soon some green shoots started popping up.

The floating stem drifted around and also started growing new roots, but not as fast as the others – perhaps because it didn’t receive as much direct sunlight, being under the netting. So far, though, it doesn’t seem to be eaten up by the the fish as I thought it would be.

It will be interesting to see how the plants fare as time goes on. Will they get enough nutrients from the water as their potted counterparts? For obvious reasons, I can’t add fertilizer to the fish tank, so I hope the fish help out in this area, if you know what I mean… Let’s see how this spur of the moment experiment concludes!