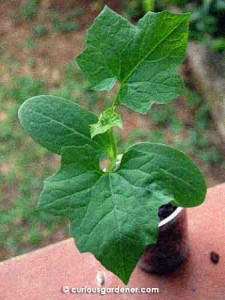 Young angled loofah plant - it grew at quite a voracious pace.

When I humbly began growing edible plants early last year, my philosophy was to stick the seeds in soil and let them grow. How that has changed! These days, I germinate the seeds and let them grow a little before putting them at the mercy of the creatures and climate out in the garden.

In my first round of growing angled loofahs, I literally planted the seeds next to the fence that I wanted the plants to vine through, and that was it. There were a couple of casualties and I ended up with a single long vine that produced 3 good-sized loofahs. We ate one, but it was harvested too late and was very fibrous. Unfortunately, the other 2 were hidden from sight, and by the time I saw them, they were too old to be harvested for eating. I still have them though – they’ve dried out, skin and all, and make an interesting pair of maracas…

This time, I promised myself I’d do a better job of growing loofahs. I germinated the seeds and let them grow in the safety of the back patio until they were nice and strong. 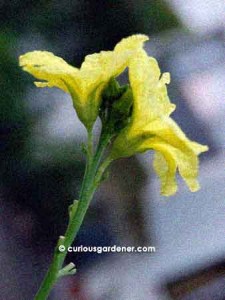 Male loofah flowers bloom either singly or in a pair. Notice more buds in the middle that have yet to bloom?

Actually, I put off transplanting them because I needed to make a trellis for them first, so one of them grew about a metre high before it was placed in its new, permanent home – my A-frame trellis. The other plant grew more slowly and was only about 40cm high when it was transplanted.

Before planting the two vines at the trellis, I amended the soil with some GreenBack compost and sprinkled in about a tablespoon of bonemeal. Then the plants went in and I backfilled with the amended soil.

The bigger vine absolutely loved the trellis and grew to the top of the 1.7m high trellis in record time. To cap things off nicely, a female flower bud grew right at the top of the trellis. I hand-pollinated it at night, since the flowers bloom in the evening, and began watching the bud like a hawk for the next few days. I fancied that the little fruit was expanding, and by the third day after the flower bloomed, it was clear that pollination had been successful and the fruit was growing. 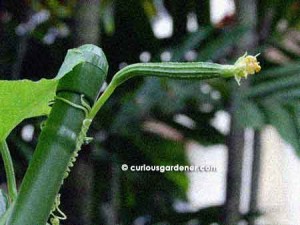 The female loofah flower grows upright, then bends to a horizontal position after blooming.

And grow it did. It actually grew a whole centimetre over 24 hours, and just kept growing incredibly fast. I realize that that last statement can be interpreted in many ways but it’s strictly in context of the loofah growing on the vine, okay?

I hoped that it would grow as big as last year’s fruit did – almost half a metre long – but it didn’t. Well, it might have, if I’d left it on the vine longer, but we wanted to eat this one. Since I read that the best time to harvest it for eating was 12 to 15 days, we waited for the 2-week mark, then happily removed it from the vine. It was a mere 25cm long (only about half the size of last year’s crop), but tasted as sweet as all our home-grown veggies do. The only problem was that it had already begun to harden. Next time, I’ll pluck it when it’s a bit younger. 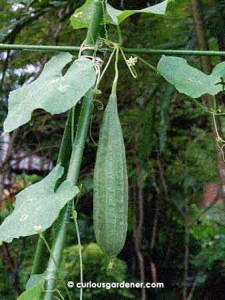 The smaller vine has been budding with male flowers for a week, and finally, the female buds have made their appearance. Unfortunately I missed the blooming of the first female flower, and it doesn’t appear to have been pollinated. Fortunately, there are a few more buds further up the vine, so I will have to be more observant so I can hand-pollinate the next flower.

The first vine has yet to produce another female flower. It was attacked by the same kind of caterpillar that went for my caixin plants – they target clusters of flower buds and leave sticky webs behind. These, however, are bigger caterpillars, but they also had a great time eating the buds before I caught on to them. I suppose the plant will have to recuperate for a while. Maybe it’s time to sow another couple of seeds to ensure a continuous supply of ketola…