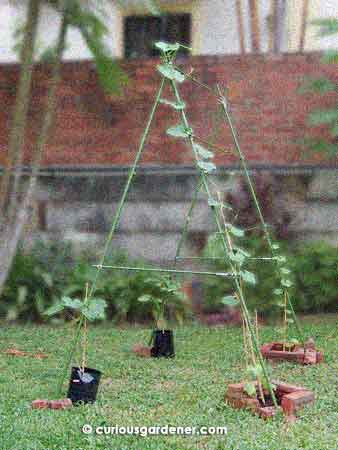 My latest A-frame trellis with angled loofah vine growing on it.

I’ve experimented with a few versions of the classic A-frame trellis, usually with thin bamboo sticks that work for small, light plants. Okay, so maybe I don’t grow that many small, light plants – which is why the trellises usually fell over sideways or into themselves, and needed a lot of hastily-added supports as the plants grew.

On a recent visit to one of my favourite plant nurseries, I was thrilled to see thin metal poles encased in plastic on sale – and they were of various lengths and thicknesses. I usually like to use recycled materials to make my trellises, but I’ve been unable to find poles that would last in the garden. Insects happily set up home in the hollow bamboo poles, and I don’t like that. Nope, these new poles were perfect – strong and insulated. To the amused curiosity of the people at the nursery, I bought an armful of these poles and went home one happy gardener.

I like to keep my DIY projects as simple as possible, and so constructed my A-frame trellis of: 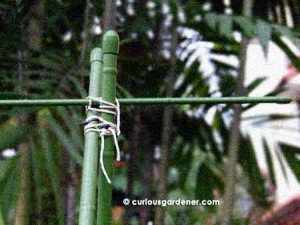 The top of the trellis, with the horizontal pole extended

The first step was to decide where the first end of the trellis would be. This is where 2 tall poles would be anchored in the ground to form an inverted ‘V’. I loosened the earth then pushed the sticks in at an angle so they joined at the tops. You need to let them cross a little, like an ‘X’, so you can later sit the horizontal pole in the ‘V’ at the top. I used a cable tie to secure the tops of the poles, then wedged stones at the base, tamping them into the soil to give more support. Finally, I tightly tied string over the cable-tied joint to hold the poles together. There’s probably a technique to tying such joints, but until I learn it, I simply wrap the string every possible way to bind the poles as tightly as possible. I’ve learned the hard way that the trellis will collapse more easily when the joints aren’t tight, because they can move and loosen, and then begin to succumb to gravity.

The next thing to do was attach the horizontal short stick that would create the ‘A’ shape. I positioned it so that it didn’t stick out too much on the outside. This allowed me to place it as low as possible, which would add to the strength of the frame. Again, I used cable ties on each end to hold the stick in position before I tied the poles securely. 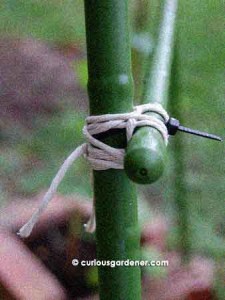 The horizontal joint on the side of the trellis. See the cable tie sticking out on the right? Leaving it on will help in case your knots give way...

You’ll notice that my tying of this joint is more deliberate. A few months ago, I found a book from my childhood, Huts And Tree Houses, that among many things, demonstrated how to tie perpendicular sticks together. For fun, I tried to create a tic-tac-toe style trellis, which had involved using this tying technique several times – which is why I remembered to use it here.

With the first ‘A’ complete, I placed one of the thin poles on the ground to gauge the distance for the other end of the trellis. I didn’t want to risk not placing the sides close enough, so I gave allowance for the top stick to overlap the two ends.

I repeated what I did to construct the first ‘A’, then it was time to lay the last pole across the top and tie it in place with more string. The last two thin poles were attached part of the way up to provide horizontal growing surfaces. I was lazy and simply used a cable tie, pulled tight, on each end to secure them, reasoning that they aren’t major joints and it’s alright if they slip out of position…

And just like that, in less than 30 minutes, my 1.7-metre high trellis was complete.

If you need to amend the soil where you’re putting in your plants, do it beforehand. My plants – in this case, a pair of young angled loofah plants – were already growing up short support stakes. I positioned them so that the supports would lead the plants to the trellis. They settled into the new home and their tendrils latched onto the trellis within 2 days. Now it’s time to see how this trellis design suits the angled loofah.