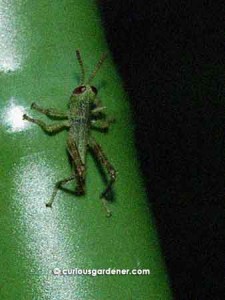 The first sighting - on the trellis

I was in the garden in the evening with my camera when I caught a little movement out of the corner of my eye. A little head was peeping at me from behind a stem. I moved to look at it better and it moved quickly behind the stem. After a short game of hide and seek, I realized it was a little grasshopper.

How cute, I thought, finally getting a good picture of it as it ran up a pole. It finally got fed up with me and jumped or flew off. I thought that would be the last I saw of it.

A few minutes later, across the garden, I was checking on my brinjal plants when I saw … could it be the same little grasshopper?

Maybe – but it had company one leaf down. Oh, I thought, a sibling! 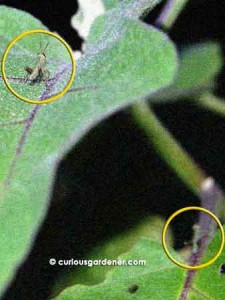 Not one, but two, grasshoppers on one aubergine plant.

One plant down, though, there was another baby grasshopper… 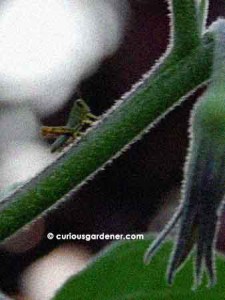 What? Another grasshopper on another eggplant plant?

And another on the sunflower plant… 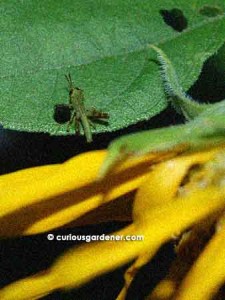 If this sunflower hadn't already bloomed, that grasshopper wouldn't still be on the plant!

And two more on an okra plant… 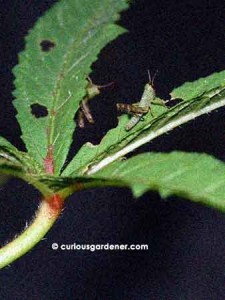 A pair of little grasshoppers munching on my okra plant

No, make that three… 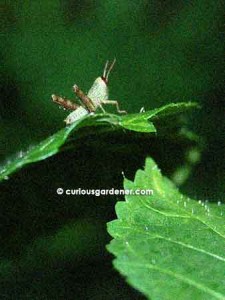 Oh boy, a third grasshopper on the okra plant? 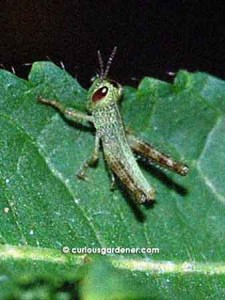 What?! A FOURTH grasshopper on the same okra plant?!!

I rushed online to see whether I should panic or not. I was fairly certain that there were probably more little grasshoppers around than I’d seen, and I didn’t want them to become big pests. Honestly, I don’t want to have to kill them unnecessarily. We haven’t seen as many grasshoppers around as there used to be, say 30 years ago. But, I also don’t want them to destroy our plants.

Well, I was somewhat comforted to learn that grasshoppers have a number of predators, and I predict that some of the birds that visit the garden will be snacking on them – maybe even the Smyrna kingfisher. So I’m not going to panic just yet. Nature can keep on rolling and I’ll be a spectator. It’s just funny that when I said last week that we’d probably see the big grasshopper again, I thought it would be in context of it coming to feed in the garden – I didn’t think it would be in terms of it breeding here!