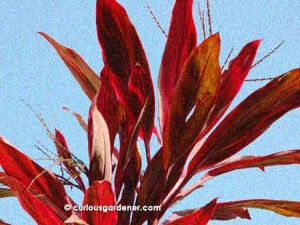 My blazing beauty of a cordyline, just after flowering. Isn't it a majestic sight!

Here’s the thing. When I first got interested in gardening, I wanted to beautify the garden. To me, this meant having bright, colourful flowering plants. And so we ended up with Peacock trees, different types of periwinkles, bauhinia, allamanda, and many other flowers that I didn’t know the names of, but had to have them because they were pretty. It’s lame, but that’s how I started.

I also had a sort-of agreement with my Dad – he’d look after the fruiting plants and I could manage the “fluffy” stuff. But then he saw how cordylines had been used in landscaping and decided we needed them in our garden.

We started off by buying three little clumps. They were less than a metre tall when we got them. The leaves were a very deep maroon, almost black, and I wasn’t impressed. They weren’t anywhere as pretty as all my colourful plants. However, as the plants matured, the leaves changed colour to maroon, then deep red. I changed my mind then. 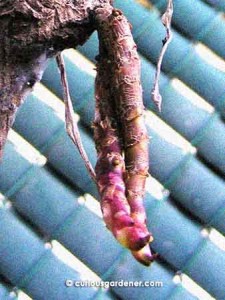 I thought these were roots, but they were leaves sprouting from the bottom instead!

Time passed and the plants grew. Each clump grew taller and bushier, and we had to prune them. Now, it’s my pet peeve to not throw a healthy plant away, so my automatic reaction to any cutting is to try to grow it. I figured we could make a hedge of cordylines if I succeeded. To my surprise, I did! At the time, that was the biggest plant I’d tried to grow by cuttings — the stems were about 4 feet long, and I simply pushed the end into the ground as deep as I could, to keep it upright and give it a good chance to root. Naturally, my success egged me on, and we eventually had cordylines lining the front and side fences.

Fast forward a few years during which we didn’t have much time for gardening and the plants pretty much fended for themselves. They grew bigger and bushier, eventually looking a little forlorn that they weren’t getting as much TLC and fertilizer as before. Some branches had grown too long and had become top-heavy, causing the branches to dip downwards. The leaves, however, continued to try to grow upright, so we got some pretty interesting shaped bushes (before we finally got around to pruning them). 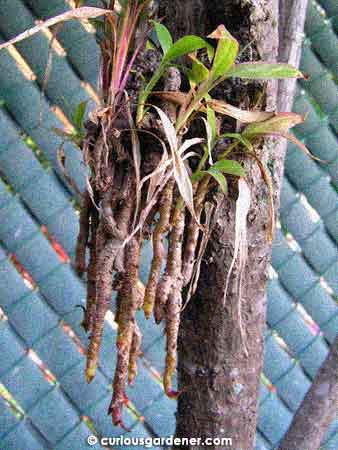 I also noticed that some of the longer branches had developed what I thought were aerial roots with maroon-green tips. Ever the curious gardener, I broke off a couple of the “roots” and stuck them in a flowerpot. Guess what? New plants grew! Had I left them on the parent plant long enough, I would have learned that the bottom tip would eventually hook upwards and develop into the leaves of a new plant. 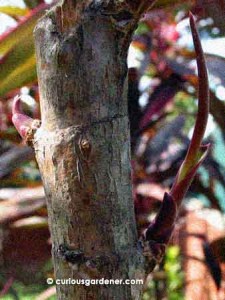 These root-like growths appear along the main stems where, in my humble experience, the plant can be pruned and replanted. They develop into “cordylets” (as I’ve nicknamed them), sprouting leaves at their tops in addition to the sprouting bottoms. I’ve found that these can be pulled easily from the main stem and planted successfully. The plants are so ingenious that you can even lay the detached stem horizontally and it’ll sprout not only at either end, but also along the stem. They’re incredibly hardy.

Oh yes, and when you prune the plant, the parent plant dutifully grows up to three shoots to make up for the missing “head”, so you get an even bushier plant thereafter. Absolutely fascinating — to this curious gardener, anyway!

Cordylines love the sun. The leaves of our red variety change colour to a maroony-red in full sunlight. Once in a while, you’ll be rewarded with long arrays of small, pale pink flowers. Reminds me of those decorations they have at Malay weddings. The leaves of the young plants are light green, but as the plants mature, they will turn almost black before putting out pink, red or maroon leaves. 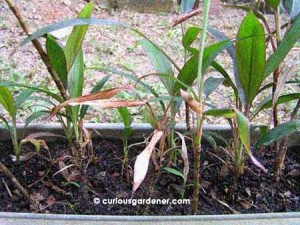 My cordyline "nursery" made from aerial plantlets plucked from the parent plants.

Visit the International Cordyline Society if you want to learn more about these beautiful plants. I found out there there are way more varieties of this plant than I’d ever imagined! Hope you find it as interesting.