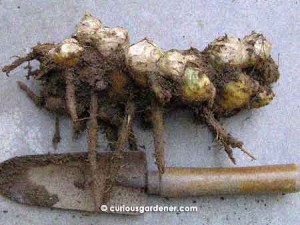 Last year, I started growing zingiber officinale or culinary ginger from bits of ginger bought from the supermarket. I had a few good clumps of them, and a few plants that also died off, no thanks to my trampling dogs. Each plant consisted of an interesting row of ginger rhizomes.

The first shoot grew out of a lump of ginger. Below ground, the rhizome grew as the stem did. Then, the rhizome started growing a new stem that grew out of a new segment. From there, it kept adding new stems in a straight row, creating a very orderly looking ginger rhizome that I found so cute! 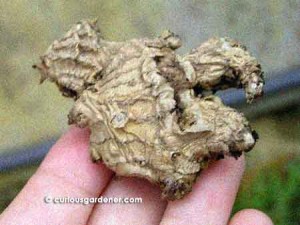 Part of the rhizome that shriveled up :(

Then, towards the end of the year – about 10 months of growth or so – the leaves died out. I dug up one clump to see what it looked like. The ginger seemed rather small, or young, compared to what we buy, so I left the rest in the ground to let them mature more. I was hoping that they would grow into those big, fat rhizomes that are sold in the market. However, after the leaves died off, the plants seemed to hibernate for a long time.

Unfortunately, a couple of clumps rotted away – probably due to the excessively rainy weather we had earlier this year. I was disappointed when I noticed what was happening, and even more so when I dug up the affected clumps to find them shriveled up and hollow – albeit with a strong ginger smell. 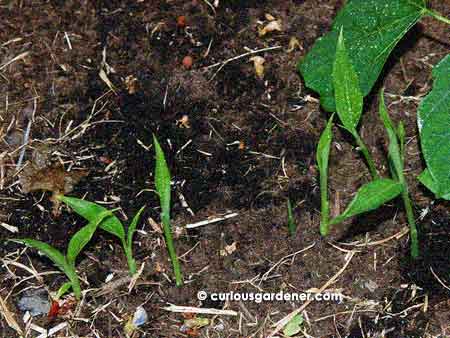 The row of new ginger sprouts from the old rhizome that was hibernating for a few months. They're the vertical sprouts growing beneath the leaves of my jicama plant.

A few more clumps remained dormant, and when I got my load of compost a few months ago, I added a layer of mulch to the planting bed where the ginger is. I wondered if the mulch would help or harm the sleeping ginger. Well, I finally have my answer, and I’m happy to report that the ginger is “awake” again, and several shoots have emerged and are growing now. Since they are in a row, I guess they’re from the same rhizome.

It will be interesting to see, in coming months, what direction the rhizome will be growing – because it can’t still be in a row if the old rhizome has started growing. 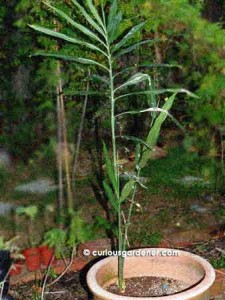 The new growth from the ginger that was planted in a flower pot last year.

Last year, I also planted one sprouting bit into a pot, to see how the growth would compare to the plants in the ground. Well, it grew more slowly and not that big, before it, too, went dormant for several months. However, it is also now up from its slumber and is growing again, better than last year. So this shows that even apartment dwellers can grow zingiber officinale, especially as it is not such a sun-hungry plant.

I guess the next stage is to see how the remaining clumps of ginger grow this year. I know that we can break off part of the growing clumps to use if we want to – and we may – but I will leave at least one plant untouched to see what it does. Stay tuned in the coming months for more…