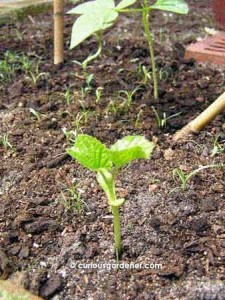 Nice healthy bittergourd sprout on the edge of my long bean bed.

You’ve gotta love those seed-dispersing birds – they’ve gifted me once again – about a year to the date – with another bittergourd seedling!

And here I was so upset that one of the two bittergourd plants I’d grown from seed had died because of the excessive rain we had in February. The gardening gods are kind!

This new seed sprouted on the edge of my recently established long bean bed, just below the bar that the bird had obviously perched on to poop. Since the sprout looked so happy and healthy, I decided to leave it there and construct a low trellis nearby for it to grow out to.

For this trellis, I used bamboo sticks, twine and chicken wire to create a sort of lean-to frame. Part one involved a simple rectangular frame embedded firmly in the ground. It had to be fairly low, as that part of it is below the horizontal part of the long bean trellis. Part two involved taller supports with bamboo sticks connecting the low to the tall, and chicken wire covering both sets of frames. So, the vines have a vertical surface to first clamber up, then a nice, tilted horizontal area to cover. After that, I reckon they’ll hang over the edges and things will get messy… 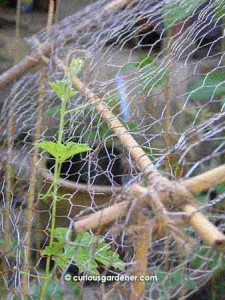 My bittergourd plant grown from seed in January only needed a little coaxing to climb up the vertical part of the trellis. Next stop, to spread out over the slanted horizontal area!

Last year’s vine enjoyed climbing over and through chicken wire more than bamboo sticks, so I hope they enjoy the bigger “playground” this time. Oh yes, it’s also advisable to wear gloves when working with chicken wire – there are loads of sharp little wire bits sticking out, just waiting to pierce and scratch you as you manipulate the wire into shape. Gloves are your friends.

Now all I have to do is train the new bittergourd sprout to grow out to the lower part of the trellis. I’m hoping that a slanted support will be all it needs to get there. I also planted out my other plant grown from a seed so they can grow on the same trellis and cross-pollinate and do whatever vines do when they grow together. That plant is already about a metre high and was starting to climb all over its neighbours in the nursery area. It latched on easily to the chicken wire and has already reached the top of the lower part of the trellis.

I’m quite excited about the plants. The vine that grew last year was contained in a large pot that it shared with my dracaena surculosa. This year’s vines have a chance to grow a bigger root system, so I’m interested to see if the fruits grow bigger than last year’s. And no matter the size, I know my sister will be thrilled to have these fruits growing here again…

Can I once again extend my gratitude to the person in the neighbourhood who contributed the seeds via the unknown bird?