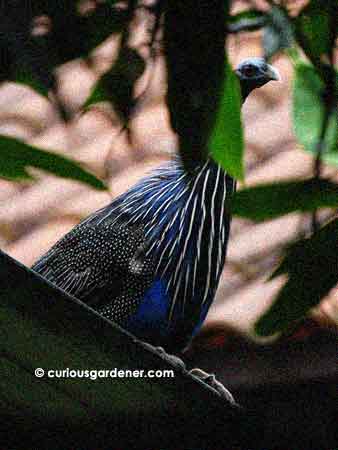 Vulturine Guineafowl probably wondering what this strange creature (me) was doing as I tried to get a good shot of it through the leaves of our mango tree. Isn't that an amazing looking bird?

There must be something about an overgrown sweet potato patch that attracts wild birds to our garden. First it was the Blue-Winged Pitta a couple of months ago, and now it’s a Vulturine Guineafowl.

Ha, yeah, I did a double-take when I heard the name, too, but honestly, when I first got a look at this odd bird sitting on our shed roof, I thought it could be some sort of vulture, myself.

This has to be the biggest wild bird I’ve ever seen in our garden. Think body the size of a duck, with a very thin, long neck attached to it, and a small head with large, red beady eyes… That’s what we saw, when I managed to get a clear photo of it. And yes, I always run for the camera when we see a new bird, because they’re so fast that you can’t see and notice everything in just a few seconds. 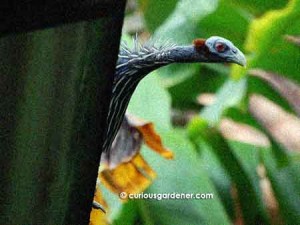 This is what we mostly saw of the bird - that head and neck craned as it peeped over the roof edge, or around the corner, to observe us. Tell me this doesn't make you think of a vulture!

The bird was spotted around lunchtime today on one end of the roof. When I went to look for it, it had moved to the other end that overlooks my overgrown sweet potato patch. From under the shed, I looked up at it, and from the roof, it peeped down, showing what a long neck it had. It was rather funny! The vulturine also didn’t seem to mind when the camera flash accidentally went off in my excitement – three times! After that, it became a challenge for me to get a good shot of this unusual bird, and to my surprise, the bird didn’t seem to mind me getting close with the camera – well, as close as one can get when the roof is over 2 metres high! It just perched on the edge of the roof, occasionally peeking down at me. Otherwise, all I could see were the tips of its feet and beak just over the roof edge.

What also amused me was that when I spoke softly to it, it responded a little with a soft chit-chit-chit kind of noise. Perhaps it was lost and confused. I felt quite sorry for it because the weather was absolutely miserable today. There were several heavy passing showers, and it was sitting out in it all the time. It didn’t seem to mind the rain, though. After all, there was a roof overhang just a metre or so away from it, and a mango tree that it could have hopped onto, literally. 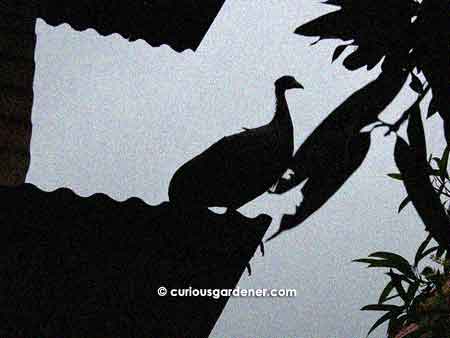 Silhouetted against the gray skies, you can see what an unusual body the vulturine guineafowl has. Also notice the toes over the edge of the roof...

So once I got decent photos, I hopped online to try to find its identity. When the searching didn’t yield results fast enough for me, I tossed it to more knowledgeable friends and got suggestions of peacock, pheasant, cassowary and vulture until Mr Otterman himself put me out of my misery with the bird’s identity. It’s not native to Singapore, so he suggested it was either an escapee from the Bird Park, or an illegal pet. I tried my best to see if the bird had a tag on the leg but didn’t see one – so the probability is that it’s not from the Bird Park.

I had to go out in the late afternoon and when I returned, the bird had disappeared. In the meantime, Mr Otterman had informed our local nature groups, BESG and ACRES of the sighting. I didn’t think the bird would get such attention, but I’m flattered that it dropped by at our garden. Like I said, it must be the sweet potato patch that attracts these wild birds…