I haven’t complained enough about the weather here lately for those of you not in Singapore to know that it’s been raining a lot since Christmas. Well, it has, and we’ve been getting rain almost every day – a light, gentle and cool rain that has come almost every afternoon, without fail. So unless I visited the garden in the mornings, I didn’t have a chance to do so because I just don’t fancy walking in the rain any more. 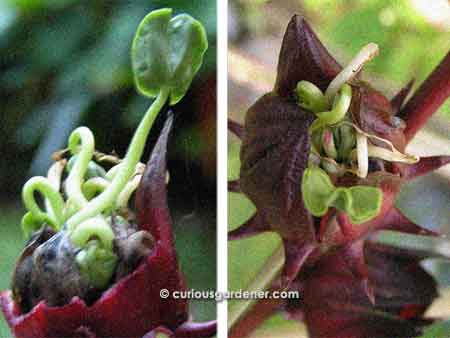 And, after reporting at Christmas how the roselle plant was geared for action, it has since produced several fruits along each of its three stems. No thanks to the rain, it was many days before I could check on the roselles. I had the pleasant surprise of seeing a whole bunch of little roselle sprouts peeking out of a pod when I finally got to visit the plant on one of the rare sunny days we’ve had in the last few weeks. Of course, like a proud parent, I took pictures, then removed the fruit from the plant to salvage the seedlings. 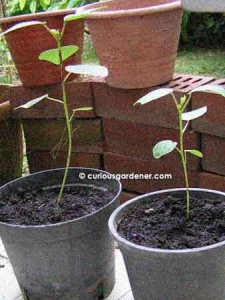 Update: The first two roselle plants from the first round of growing from seed in December are growing well!

Note that you can’t just pull the fruit off – the stem is very fibrous and stubborn, so you have use something sharp to remove it, or risk tearing the stem. I need to remember that myself… Heh.

The pod yielded over ten sprouts and several softened and probably-about-to-germinate seeds. The sprouts were put in individual pots while the seeds had to share homes, until they prove they’re going to grow.

All in all, that rescue mission was a success!

And now that the weather has dried a bit, I took the opportunity to harvest seeds from the other roselle fruits, and based on what I managed to get, I can tell you that each fruit will yield at least 20 seeds. That’s a fun fact, huh?

Finally, in an update on the first lot of seeds that I harvested and planted together with the first pod-sproutlet in December, only one other plant grew. Perhaps the layer of cocopeat was an overkill… That’s partly why I’m now a fan of surface sowing! So the current count is two young plants growing from that earlier round – with several more to come from this second round!