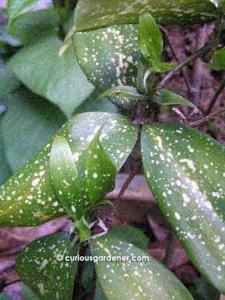 The dracaena family is so diverse that I became a fan of it without realizing it. 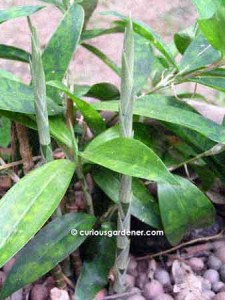 In my childhood, we had a few pots of Japanese bamboo out front – the spotted type, or Dracaena godseffiana. Japanese bamboo was the name we grew up calling it. They went “out of fashion” after some time and were moved around the garden until they finally ended up just under the canopy of the mango tree, where they’ve remained for years. I could have sworn that they were all the same plants, yet today when I look at two of the three large pots we have, it seems that the leaves have darkened and the spots have faded so that the plants resemble the Dracaena surculosa punctulata strain. It’s the oddest thing. Can the plants have mutated over time? We have just the one pot of the original godseffiana left, and I’m nervous about doing anything to it.

We also used to have dracaena fragrans growing out in the garden. It grew into a big clump and we decided to cut it down eventually because the leaves tend to collect water near the stems, and at that time, there was a high incidence of dengue in the area. So, anything that collected water had to go. I guess if it had been a house plant, that would have been a different matter. Pity I didn’t think of saving some for that purpose, but I didn’t appreciate it enough at the time. 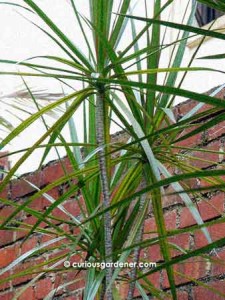 Dracaena marginata - pretty when potted or planted out!

When I began gardening in earnest about a decade back, my sister used to pass me cuttings from her garden. One of the plants I obtained from her was an interesting green, spiky-topped plant. At least that was what I called it until I learned the proper name for it – Dracaena marginata, so named for the thin red stripe along the edges (or margins) of the leaves. It makes an interesting potted plant, and planted in the garden, it can grow pretty darned tall! Because it becomes top-heavy, our dracaena grows straight for about 3-4 metres before it starts tipping over. The fun thing about this is that the head of the plant keeps trying to grow upwards, and you end up with an arched stem. Besides that, new growth starts emerging at the middle of the arch, creating interesting shapes (to me, anyway). At the height of our garden neglect, the marginatas had grown to almost 6 metres with the bent stems forming wide arches – imagine a bridal party passing under the arch kind of wide. Together with the new branches, they formed very picturesque shapes. I wish I’d thought to take a photo of that, but I didn’t. 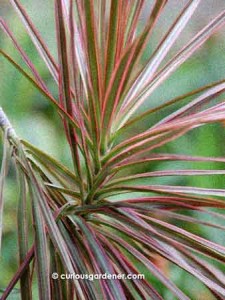 Rainbow dracaena - lovely to use in landscaping!

Another species of dracaena that greatly attracted me was the Rainbow dracaena, or dracaena marginata tri-colour or colorama. I found the pinkish leaves very attractive in my landscaping attempts, and planted them out in the garden, then experimented propagating them by cuttings in pots. They did well all round. I quite like keeping them small-sized in smaller pots, but growing them in pots of various sizes allows them to grow to different heights and shapes, which is fun, too. I enjoy shifting them around and mixing them with other plants to get different effects. My original clump is still growing out in the garden. It’s one of the plants that has gone pretty wild, but in an artistic way! 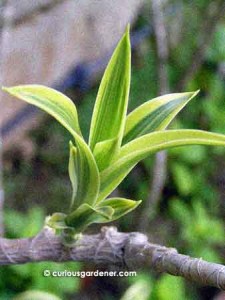 My final dracaena is the reflexa variegata, or Song of India. I didn’t know it was related to the other plants – I was simply attracted to the variegated leaves, because as always, I was looking for new colours, shades and patterns to add to the garden. The pale yellow edging to the light green leaves was intriguing to me. I have a pot of it that I keep shifting around – I found it didn’t like full sun, and eventually found a partially shaded spot that it likes, based on the sudden growth spurt. The plant has since crowded that pot and is awaiting being split into a couple of new pots.

An overall observation of the dracaena is that I like how the stems grow too long and fall over; the varieties with thicker stems grow into odd curves and shapes, and it’s just a lot of fun to me! I am just amazed that these plants are all related, because although they are all “spiky-topped”, the shapes, colours and textures of the leaves are all so different. There is such beauty in diversity.