I know I said I probably wouldn’t propagate the bittergourd plant, but when push came to shove and I saw the bittergourd vine showing signs of The End – vines and fruits were getting smaller and smaller, and there were lots of dying leaves on the vine – I changed my mind. Yes, I do that a lot with my plants. My sister loves eating bittergourd, and I love growing things that we eat, so it was a done deal – I had to continue our supply in the garden. So, spotting a ripe fruit on the vine that had split partially, I plucked and plonked it into a pot of earth, trying to replicate what would have happened had the fruit fallen to the ground itself.

What this means is, I utilized as many options as possible by slightly burying one or two seeds, leaving a couple exposed on the earth, and leaving a few on the fruit skin that I kept with some facing the sky, and the others between the earth and fruit. All these were in a pot that I left out where it would get full sun and rain, whatever the weather threw at them. I figured I ought to get at least one sprout out of it. 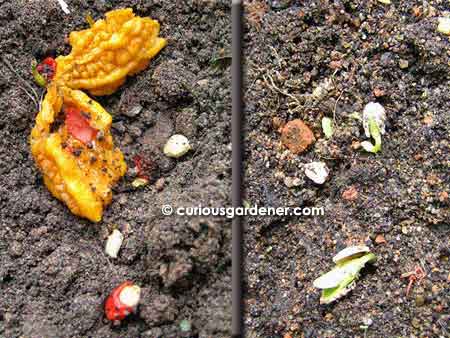 Left: the seeds from the bittergourd. Right: the sprouts from the seeds.

Open to the elements, the fruit decomposed within a week, and in that time, three sprouts showed up. As far as I can tell, they’re from the exposed seeds. I guess there’s something to surface sowing, huh? 8) However, true to form, only one seedling survived. 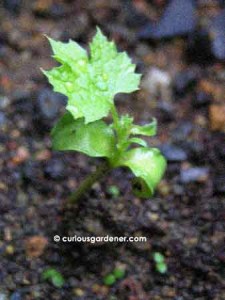 Another ripening fruit on the vine caught my eye, but burst open sooner than expected. While searching the ground for the scattered seeds, I found some older, dried seeds that had been dispersed some time earlier. As I’ve mentioned, it’s difficult to spot the fruits until they’re yellowing, so several fruits had already burst and scattered seeds over the weeks. There weren’t any new sprouts in the ground, though. I wonder if the snails got to them first. Anyway, I rooted through the older seeds to see if any were viable. Most were empty shells, but a couple were still intact. I popped them in the pot and crossed my fingers. Again, a few sprouted, but only one continued growing. I’ll be happy with two vines for now. Hopefully they’ll cross-pollinate each other and give us more and better fruits for the next round. This has been one of the better garden to plate successes so far, and I’d definitely like to grow more for the family.

For now, though, I thank the original bittergourd vine for a wonderful nine months of providing for us…