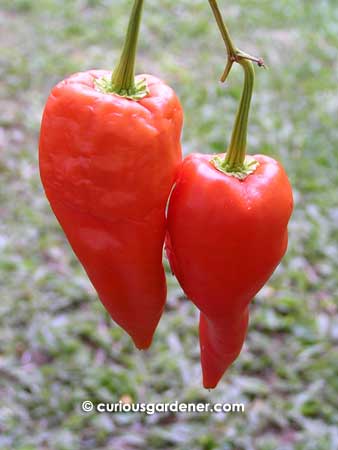 I decided to leave a couple of pepper paprikas on the plant to see how they would develop, and they cooperated by slowly changing colour from pale green to yellow-peach, and then to a deep vermilion that’s almost, but not quite, red, just like regular chillies.

Unfortunately, leaving them to ripen on the plant seemed to bring about the demise of the plant. The leaves shrivelled and dropped off, and eventually, one of the fruits did, too. After just a day or so on the ground, it had decomposed enough to reveal the cluster of seeds within. I decided to move the fruit to a small flower pot, where the sun and rain helped to complete the decomposition process. Now exposed to the elements, the seeds have begun to germinate, and I can begin the process again …unless, of course, the dastardly snails discover them! 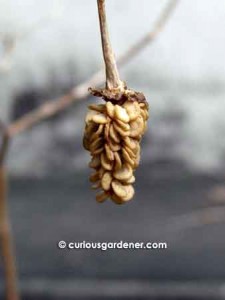 Seeds still on the plant!

The other fruit actually decomposed while still on the plant, which was quite fascinating. It shrivelled up and the skin eventually decomposed completely, leaving a little cluster of seeds dangling from the plant!

The seeds for these particular peppers were obtained in Thailand. I plucked the initial fruits when they were green because that’s the colour they were shown as on the packet of seeds. They grow to about 8cm in length and resemble squat chillies, and if I didn’t mention it before, they taste like bell peppers with the kick of chillies. 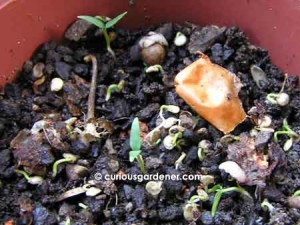 The only thing about growing them that I don’t like is how the plants attract white flies. Apart from dealing with the insects, it’s a fairly low maintenance plant – just water daily and fertilize once in a while. Easy-peasy.