So my second crop of French beans was planted about 3 months ago using seeds that I had saved from the first crop. Truth be told, the plants were spindly little things. I had opted to grow them in a pot – yes, I put all three into a single big pot without considering that it would have been better to put each in an individual pot. But, they rooted themselves into the ground eventually, and I hope that has helped. 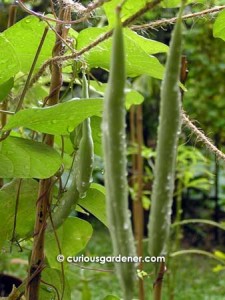 Learning from my first experience, I made a conscious effort to fertilize the plants as regularly as I could remember, alternating between seaweed solution, bonemeal, fish emulsion solution and a NPK fertilizer for fruiting plants. In my opinion, they didn’t seem to help much, because the plants remained very skinny and unhealthy-looking to me. I thought I would end up allowing the follow-up report on the beans to slip through the cracks of the blog, never to be mentioned again.

But, I continued to keep the faith, providing supports for the plants to wind their way up, which they did. But they were still emaciated-looking. However, I am an eternal optimist, and sometimes that pays off. Tiny flowers began to appear, and I thought they’d abort. So I didn’t pay them much attention.

Remember what happens when I don’t mother my plants? They do things without my knowledge, and I’m deprived of the parental pride of photographing their progress. So, yes, beans formed and grew. And a few more are forming while the earlier ones are growing bigger. And they seem to be growing to normal size, too.

I’m surprised, to say the least! I hadn’t expected my saved seeds to bear fruits, because I’d heard that some of these commercial hybrid seeds only work the first time around and then are barren. It keeps people coming back to buy seeds, you see. In fact, I’d already bought a new packet of seeds in anticipation of this crop failing. This is one of the rare times I don’t mind being wrong about something!

So, we’ll be partaking of a few beans soon. I need to start the next crop so that we have a more continuous supply of beans. I also have to give Crop 2 more space to grow, to see if my suspicion about having sufficient space to grow affects the plant’s life span, and am resorting to one of my “expand as you need space” trellises. Those observations will follow in a few weeks or so…